EXPECTATIONS: It had to happen sooner or later. Paul Rudd has been playing the put-upon normal schlub for so long that the only way for him to break out of that role and grow as an actor is to start stealing roles from his comedy buddies. First in line for movie theft is Seth Rogen. Our Idiot Brother looks like a film tailor-made for Rogen, but since he's busy starring in crappy action comedies now, Paul Rudd stepped up to fill his shoes. I'm really not expecting much out of this one.

REALITY: It isn't clear to me what Our Idiot Brother was trying to do, but whatever it did, it did it well. I don't know whether this film was supposed to be some kind of a scathing parody of the stereotypical hippie stoner, or a scathing parody of the erudite Manhattan upper-crust that happens to star a stereotypical hippie stoner character. Either way, I came away from this movie liking and respecting Paul Rudd more as an actor because of the things this movie puts him through in the name of comedy.

After getting busted selling weed to a uniformed police officer, Ned (Paul Rudd) is forced to move back to New York City to live with his family. Over the course of the film, he goes from living with his mother to living with one sister (Emily Mortimer) whose husband (Steve Coogan) is shooting a documentary about ballerinas, to living with another sister (Zooey Deschanel) who accidentally cheats on her girlfriend (Rashida Jones), to living with his other sister (Elizabeth Banks) who uses and manipulates him into helping her keep her job at a Manhattan newspaper. Meanwhile, Ned begs and pleads with them to help him get his dog back from his ex-girlfriend (Kathryn Hahn). 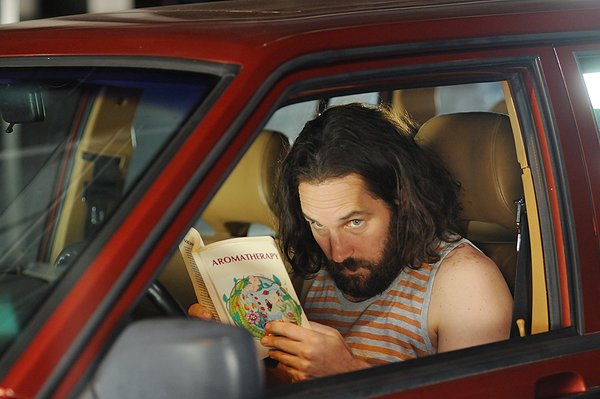 It looks amusing and charming enough, but don't forget that this is supposed to be a spot the ball competition.

There isn't much in the way of story here, but that's the way a lot of character pieces tend to go. We watch as Ned interacts with various members of his family, and laugh (or cringe, depending on how you view it) as Ned inevitably fucks things up beyond repair. Whether it's blabbing about someone's affair or screwing someone out of work, it seems like no matter what Ned does he can't stay out of trouble. Ned eventually grows on us as a character, mostly because there's an earnestness to Rudd's performance, and to Ned as person. As we come to learn more about Ned and his family, it quickly becomes clear that these people are far more screwed up and disturbed than Ned is.

Ned isn't even a particularly disturbed person. He just happens to be exceedingly naive (and more than a little medicated). More than anything, Our Idiot Brother is a fish-out-of-water story along the lines of The Beverly Hillbillies or Crocodile Dundee (or, more succinctly, Crocodile Dundee in Los Angeles). While Ned never appears flabbergasted at New York City or at any aspect of modern city life, he does come across as completely socially retarded. Secrets and lies do not compute for him, so it makes complete sense to him to blab about one sister to another. It's okay, because he simply doesn't know any better. 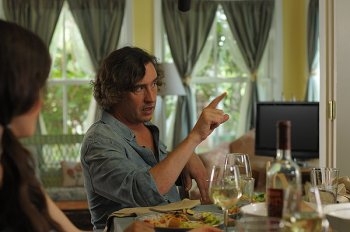 Steve's found it.What confuses me about the film is that I can't be sure whether we're supposed to like Ned's family or not. Each of his three sisters love the guy to death and bend over backward for him, but as soon as Ned says something stupid or becomes a bad influence on their kids, they fly into a rage and pass him off to the next sister, until eventually they're all pissed off at him for doing what they all know he does all the time.

The fact of the matter is that Ned's sisters hate him for casually revealing what a bunch of hateful, inconsiderate people they are. These are people so consumed with their lives and their social statuses that they forget to stop and simply enjoy the lives that they have. Sure, Ned is an ex-convict hippie without a cent to his name and no prospects, but at least he's a happy guy with a positive outlook. This film seems to be taking the Bobby McFerrin approach to life.

There are a few good laughs to be had along the way, but for the most part Our Idiot Brother is less a typical comedy and more one of those indie dramadies. You know, one of those films where a great cast acts out a drama with an utterly insignificant plot, while one of the actors gets in a few good zingers in between scenes of characters making mountains out of molehills.

Paul Rudd turns in an oddly endearing performance as Ned. He isn't exactly playing Seth Rogen the way I originally imagined he might. Ned is a little more nuanced than that; he's every bit the hippie weirdo the ads make him out to be, but there's a bit more depth to him. Rudd turns him into a character that we genuinely care about, and while his sisters get a moment or two to defend themselves against Ned's shocking earnestness, the movie does lag whenever Rudd isn't onscreen.

Among the rest of the cast, Zooey Deschanel and Adam Scott make the strongest impressions. Since this isn't a big-budget turd of a movie, Zooey actually makes the effort to act instead of simply reading her lines into the camera. Her character is also the only other one we're supposed to care about, and she acquits herself nicely. At the same time, Adam Scott shows up as the neighbor to Elizabeth Banks' character. He only has a couple minutes of screen time, but in that limited window he delivers a performance very similar to Paul Rudd's. His is the character that Ned would probably be if he were a regular person and not a cartoony stoner.

The film does take a bit of an annoying turn as the third act makes all of these apparently terrible people vilify the one person who never actually did anything wrong. You could argue that Ned doesn't belong in the city, or even in any social setting, and you may be right. However, Ned's journey as a character, sporadic and slow though it may be, is the reason to see Our Idiot Brother.

MINORITY REPORT: Paul Rudd reminds me of Friends. I don't like being reminded of Friends and yet it keeps happening. It just isn't fair! - Ian "Professor Clumsy" Maddison