EXPECTATIONS: This is a real movie. (Here's the trailer to prove it.) "A law student decides to sue Satan for $8 trillion." Now, as far as hooks go, that's not bad. And who did they get to play the devil? Malcolm McDowell. Alex DeLarge himself. Even if this turns out to be some dopey Christian film from Australia with sub-Direct-To-Video production values, tell me in what universe that right there doesn't sound like a thoroughly watchable movie?

REALITY: I have so, so many questions for this film that I don't really know where to begin. Suing the Devil attempts to put Satan on trial for all the nasty things he's done since the beginning of time, but instead of laying some kind of definitive smackdown on the Prince of Lies, the movie winds up spinning its wheels until it comes to the conclusion that the very idea of suing the devil is silly and you really shouldn't bother.*

As the film opens, we meet Luke O'Brien (Bart Bronson), an emotionally distressed law student who would love nothing more than to murder the man who accidentally killed his mother in a drunk driving accident. (This is the first thing we learn in the entire film.) Instead, Luke backs down and decides to do something positive: Sue the devil for $8 trillion. His reasoning is that since Satan is the root of all the world's evil, why not take him to task for it? Just before the judge throws Luke out of her courtroom for being a moron, the devil himself (Malcolm McDowell) shows up, armed with a dozen of the world's scuzziest defense attorneys. The Trial of the Century is on as Luke attempts to prove that Satan is a meany-pants, while Satan's lawyers dig up as much dirt as they can on Luke's past sins. 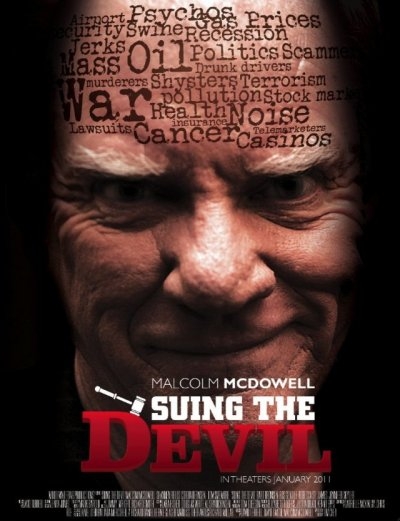 Here's a poster for the ages.At its core, that's a perfectly decent concept for a courtroom drama. Truth be told, it might have been better as a sketch on Saturday Night Live, but there it is. Just like with Soul Surfer, the major problem with Suing the Devil isn't that it wears its spirituality on its sleeve, but rather that its filmmakers didn't bother thinking any one part of this film through before going forward with it.

The actual trial, which takes up 90% of the film, doesn't make a damn lick of sense. Satan's defense is so heavy-handed and vile that any jury in the real world would see right through it as an attempt to make the plaintiff look like an idiot. When put on the witness stand, Luke is asked "Have you ever done internet porn?" Are they asking if he's ever watched it or performed in it? It's never made clear, but then it's completely irrelevant. This line of questioning only serves to establish that Luke's done a lot of things he's not proud of, but what the defense seems to be forgetting is that supposedly Luke has already been forgiven for these things, so who cares?

Furthermore, the line between what is and is not admissible as evidence is fuzzy at best. The defense finds a wonderful loophole (improbably numbered Article 666) that allows them to use Luke's past sins against him. However, when Luke questions Satan on whether he was the one who made Job suffer in The Bible, The Bible is apparently not admissible as evidence simply because nobody can agree on how true any of it is. Not that it matters, because Satan's only defense for himself is "Hey, I didn't do it!"

But wait a minute... On his way into the courtroom, a reporter confronts the devil and says "If you're really Satan, then prove it!" Satan replies, "Okay, watch this," and then the devil sets himself on fire, causing the reporter to drop dead from terror. This is caught on camera by at least a dozen news teams and broadcast all over the world. That's proof enough that this man who claims to be the devil is some kind of ethereal being, and therefore must be the same devil that appears in The Bible, and therefore The Bible must be true! That alone would make this an open-and-shut case, but that alone would also end the film where it logically should have. But we still have a full hour of movie to fill, so we'll just let that plot hole sit where it is.

Then there's the character of Luke O'Brien himself. He's a law school dropout who lost his mom way too soon and is generally an emotionally unstable person. Not for nothing, but this seems like the last person on Earth who should be taking Lucifer to task in front of the entire world. Of course he's going to fuck with Luke and try to turn him into a gibbering manbaby in front of an audience of millions! Of course he's going to dig up every mild expletive Luke ever said and throw it in his face! Of course he's going to convince the world that Luke's an idiot! That's kind of what he does. Luke never anticipates the devil showing up in the flesh in the first place, but he also somehow never anticipates that the devil would play dirty. He's a law student and this still apparently never occurs to him.

This being a Christian film, I understand the need to turn it into an underdog story. Luke needs to be shown as vulnerable in every way possible, so the film can teach us that even the weakest among us has the power to defeat Satan. I can see that's what they're trying to do here, but instead Luke comes off as a bi-polar tool who is the smuggest person in the world when he gets his way, but when Satan starts taunting him about the death of his mother Luke turns into a wailing banshee who starts throwing a temper tantrum in a full courtroom. Had this been a comedy, this character's wild mood swings would have been hilarious. As it is they're just... You know what? Actually, they are pretty funny.

Two things save Suing the Devil from being a complete and utter waste of time. First, it should go without saying that Malcolm McDowell steals the show as the devil. He chews scenery and hams it up so much that one could almost overlook the bush league dialogue. As always, it's simply a joy to watch that man be evil onscreen. Secondly, I like that the movie openly acknowledges that there are all kinds of legal pitfalls in attempting to sue the pants off a supernatural entity. The movie seems to have done enough of its homework to address the legalities of even attempting such a stupid thing. When it comes time to win the case, however, that's when it becomes clear nobody working on this film has ever gone to law school, or even watched a courtroom drama. Luke's case hinges on convincing the jury that Satan is evil, while Satan's defense is "Yeah? Well...NUH UH!"

And then there's the ending. Above all else, the thrilling conclusion to Suing the Devil makes it clear that this a terrible, terrible movie. Before the movie itself even begins, we're treated to a series of interviews from folks coming out of the world premiere. When asked what they thought about the movie, most of the people they showed commented on how great they thought the twist was. So before the movie even starts, we know there's a twist coming. For 90 minutes we sit there watching, wondering what kind of Shyamalan-esque twist they're going to throw at us. Is this guy really the devil? Is Luke going to lose and be damned to Hell for all eternity? Is Jesus going to show up as a surprise witness?

Nope. None of that. Luke wins the case because the devil finally gives up and yells at everyone about how much he hates everything. Luke is awarded $8 trillion, and just like every story in which the hero wins an oddly specific amount of money, Luke wakes up in the library, realizes it was all a dream, and goes home to his wife. The end.

This is by far the worst ending you can possibly give your story, short of murdering every single character. As anyone with a degree in English or writing will tell you, this is the very impulse that most colleges spend four years beating out of you. The only time the "It was all a dream" ending has ever worked was when it happened to Ebenezer Scrooge, and it was because the character actively learned something from the dreams he had. When Luke wakes up, he goes on living the life he was already living, only without ever suing the devil and without winning $8 trillion.

The message here, of course, is that you don't need to sue the devil and win a lot of money to live a good life and be a good person. Of course, no good Christian needs to be told this, so I'm not even sure who this movie is targeting. I guess it's the same people that make self-help books and diet fads such a lucrative business. If you're the type of person who needs to be told things you already know, Suing the Devil is the movie for you. Also, I have a new book coming out in 2012. You may be interested...

MINORITY REPORT: Of course, I myself once sued the devil, albeit for much different reasons. As an employer he was rather unfair, often promising things and not following through with them, so when I slipped on a wet sign where there should have been a cone I took him to court. Unfortunately, with no evidence of my employer's existence, or even of my having slipped at all, it seemed I had no case. He's a tricky one that devil, but I'll find him. You hear me? I'll find you, you Welsh bastard! - Montague "Legally Sane" Smythe