Don't be Afraid of the Dark

EXPECTATIONS: I know very little about this film, except that it's another one of those movies that plasters Guillermo del Toro's name all over it, regardless of how much or how little he had to do with the actual movie. (Apparently he wrote this one, along with the guy who wrote *batteries not included, of all things.) The last movie to take this tactic was 2007's The Orphanage, which I greatly enjoyed, so my sights are set high on this one. I'd like to say more about this film, but I've been keeping myself intentionally... in the dark. (See what I did there?)

REALITY: Don't Be Afraid of the The Dark is a horror movie whose closing credits are written in a font that looks suspiciously like Comic Sans. I kinda feel that's all that needs be said, but when has that ever stopped me before? 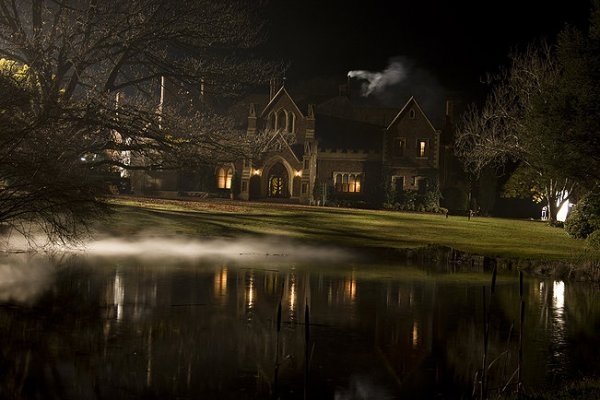 The Smythe Estate on a quiet evening.

Let's start with the big points: This is a movie about dark, evil tooth fairies. I don't consider that a spoiler, because it's basically pointed out for you in the first scene of the movie. No one is going to watch this film and wonder "Are these creatures who can't stop talking about children's teeth supposed to be tooth fairies?" They make it pretty clear for you, and in case you haven't figured it out, there's also the classic horror movie Oddly Specifically Knowledgeable Librarian to lay down some exposition. This is Tim Burton-level lazy (make a creepy old story creepier, that always works!), but it still should have worked, given del Toro's penchant for darkening fairy tales. (Or should I call them scary tales? Man, I am on a roll today!) Unfortunately, this is not really a del Toro film. 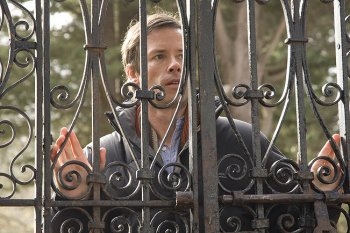 Guy, that gate isn't even locked. What the hell is wrong with you?The film starts with overly brooding eight-year-old Sally (Bailee Madison) being sent to live with her father Alex (Guy Pierce) and his new girlfriend Kim (Katie Holmes) in a creepy old house. She discovers a sealed-off room and is given cryptic warnings by the mysterious groundskeeper (Jack Thompson), then she starts to hear voices as the scary creatures try to lure her in. Then, for a very long time, absolutely nothing happens. The monsters almost get Sally, she's accidentally saved, no one believes her. They almost get her again, they don't, no one believes it. This is basically the entirety of the film. There are a few moments where tension almost builds, then the movie discovers it might accidentally become interesting and pulls back. Now, in all fairness, deliberate pacing is acceptable in a movie like this, but newcomer director Troy Nixey doesn't seem to understand that near-misses are only interesting if there's an occasional hit. Once you figure out the formula, there's no sense of danger, and the novelty of Guy Pierce being a dick to a small child for basically no reason gets really old after a while.

To the movie's credit, it definitely succeeds in creating the "feel" of the movie that it's attempting to be. That is to say, it feels like Nixey is trying to be del Toro trying to make a midnight horror film. The film's music, setting, and lighting are all sufficiently mystical and foreboding, but sense alone does not a watchable film make. In a scary movie, especially an R-rated one, it's expected that something scary should happen at some point. Not in this case. To give you a sense of what kind of clever trickery we're up to here, Katie Holmes finds the answers to the questions none of us were asking by looking in the public library in lot number 1134. If you don't get it, type that number into a calculator and turn it upside-down. Yep. Now type in 5318008 and turn it upside down! Ha! That is the mindset that is bringing us this tale of terror.

Probably the biggest indicator that this is a fake del Toro movie is the design of the creatures themselves. The mind that brought us The Faun and the world of Hellboy could not possibly have created anything so bland. The creatures' legion-esque whisper voice is suitably creepy, but once their actual appearance is revealed, they lose all ability to frighten anyone. They look like what would happen if a Smurf mated with a naked mole rat, and while that scenario is certainly scarring, the result is not. There's basically nothing here worth noting, and certainly nothing you haven't seen before, with one exception: I have never seen Guy Pierce with such poor hair and so much face-fat. It's as though both his appearance and his career are going the way of Val Kilmer.

MINORITY REPORT: You know those scary creatures that come into your room and take your teeth? They're not real, it's just your dad sneaking around while you sleep. I feel you're old enough to know this now that you have your degree. - Ian "Professor Clumsy" Maddison