EXPECTATIONS: I'm man enough to admit that I like musical theater. I'm so comfortable in my masculinity that I think it is totally acceptable for a man to sit in the back of a theater and watch a film like Burlesque totally alone, no matter what all the other moviegoers whisper to their dates. The way I see it, this attempt to push Christina Aguilera into a film career can go one of two ways: Cabaret minus Liza Minelli (Good) or Showgirls without nudity (completely devoid of watchability). Let's hope I can figure out which one it is before the ushers start looking at me funny.

REALITY: I think the Current Releases crew should find money in our budgets to hire Stanley Tucci to read our reviews aloud from now on. This is because Tucci has a Rumplestiltskin-like ability to turn even the crappiest writing into gold. This bodes well for Burlesque writer/director Steve Antin, because his script needed all the help it could get, and it wasn't coming from Christina Aguilera.

You know where all this going, and yet the movie doesn't. Tough-Exterior has to raise money to save the Burlesque club by Imminent Deadline, which is my favorite Muppet plotline. Will Spunky Heroine save the day? Who cares? Because there's not much story to tell, and apparently not enough money in the budget to add more musical numbers, the story's pacing is insanely drawn out. How can a movie which is 70% montage move so damn slow? By having unnecessary characters and plot threads, of course. 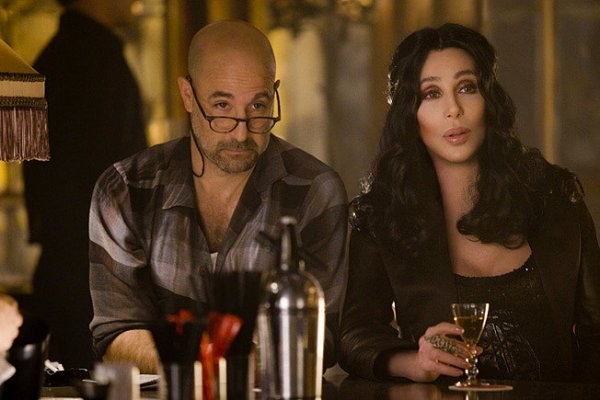 This is one of those great shots designed specifically to make you wonder what is so interesting outside of the frame.

However, for a rookie director, Antin greatly succeeds in the over-blown dance sequences, which are basically what the film rides on. The lights, the glitz and glamor are all there, and the film creates the bohemian atmosphere it's going for. If the entirety of the film took place in the Burlesque Club, it'd be brilliant. It's almost as though having that main set piece as a "Home plate" gives the film a chance to recover from itself. Outside the club, the story wanders aimlessly, and so does the audience's attention, but inside, there's no taking your eyes away from the screen.

Even the non-dance scenes in that set seem to hit the notes they attempt. There are a few scant scenes of real depth between Aly and Tess (I'm using the characters' actual names here, because these are the only times they become actual characters) that remind you "Academy-Award Winner" Cher is called that for a reason. She's actually so good that she makes Aguilera's weak performance better just by being on screen with her. There's a mother-daughter theme between the two that doesn't get explored nearly enough, and is pushed, like everything else, to an unsatisfying wrap-up of a conclusion in the last ten minutes.

This brings up probably the most interesting point in Burlesque. Much like last year's Funny People, the implications the film makes about its cast are much more interesting than the film itself. This movie should really only be about Cher and Christina Aguilera. Outside of gay bars, Cher's career has been pretty irrelevant for the past 10 years, so when the movie literally stops so that she can be on stage alone, singing a song called "You Haven't Seen The Last Of Me," the meanings behind it are pretty damn blatant. Cher, along with the producers, wants us to see Burlesque as a strange turning point in her career, somewhere between a comeback and a torch-passing.

The general message you take from Burlesque is that Cher is telling Christina Aguilera "I'm not quite done yet, but when I am, you're next, kid." Despite Aguilera's powerful voice, I found her performance quite stilted, and her dancing somewhat awkward, like someone just told her to look at the camera and act sexy at it. (Having watched all Christina Aguilera's music videos on mute for ... research, I've come to the conclusion that this has happened her entire career.) However, there are genuinely good moments scattered throughout Burlesque, and I'm willing to believe that when it comes to the next icon, maybe Cher knows a little bit more than I do.