Turbo; The Conjuring; Red 2; Only God Forgives; The Frozen Ground

EXPECTATIONS: We at the Something Awful Current Releases office have a rabid affection for Insidious. Our bathroom's called the Further; we drink from coffee mugs plastered with Patrick Wilson's face, which goes from pensive to slightly more pensive as it's introduced to hot liquid; Tiny Tim muzak haunts each elevator ride; and Ian's office lies beyond a red door that appears to us only when we sleep. So, yeah, we're big fans.

REALITY: The Conjuringseems designed to bide the time between Insidious and the forthcoming Insidious Chapter 2, as director James Wan reteams with his star Patrick Wilson to make a thematically similar film. If anything, The Conjuring proves absent Insidious screenwriter Leigh Whannell's worth as a stabilizing force, if not a master of dialogue. 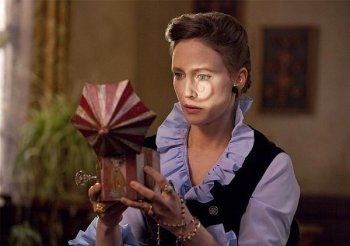 Is this one of those "don't look in the box" scenarios?There's a lot of loose change jingling inside The Conjuring's plot, purportedly based on a true story as related by paranormal investigators Ed (Wilson) and Lorraine Warren (Vera Farmga), but here's the main thrust: It's 1971, and Carolyn (Lili Taylor) and Roger Perron (Ron Livingston) have moved their five daughters to Rhode Island. And wouldn't ya know it, their farmhouse, in which clocks stop at 3:07 a.m. and the cellar has been walled off by previous tenants, is haunted. Carolyn plays hide-and-seek with a ghost, and the family dog refuses to enter.

Wan demonstrates his knack for pacing in the first half of The Conjuring, in which he wastes no time introducing the Warrens and terrorizing the Perrons. There's a tremendously frightening scene in which Wan nails the neuroses of the imaginative child, as the camera lingers on the shadow cast by a still bedroom door until we too are wondering if we see a figure in the darkness ... and if the door is moving.

Strangely, The Conjuring sets out on the long road to anticlimax once the screenplay, written by Chad and Carey Hayes, brings the Perrons and the Warrens together. Whereas Whannell and Wan swung for the fences in the second half of Insidious, Wan-solo settles for stolen bases. There's a montage of the investigators rigging the house for spirit photography. The Warrens are assisted by Drew Thomas (Shannon Kook) and blockheaded local cop Brad Hamilton (John Brotherton), who engage in attempted witty repartee. The climax takes us into the inner recesses in the house.

As screenwriters, the Hayes brothers' greatest accomplishment was affording filmmakers the opportunity to "kill" Paris Hilton in the 2005 House of Wax remake, providing us a tool to visualize our misanthropic billionaire-heiress death fantasies. Here, they afford the audience multiple opportunities to caution characters against doing dumb shit they're in the midst of doing. At some point, I stopped counting how many times theater patrons yelled at the screen as characters descended dark staircases, chased impossible noises, approached the creepy dresser through which demons travel, etc. I hate to belabor comparisons, but Insidious was strongest when it subverted such incredibly ill-advised behavior. 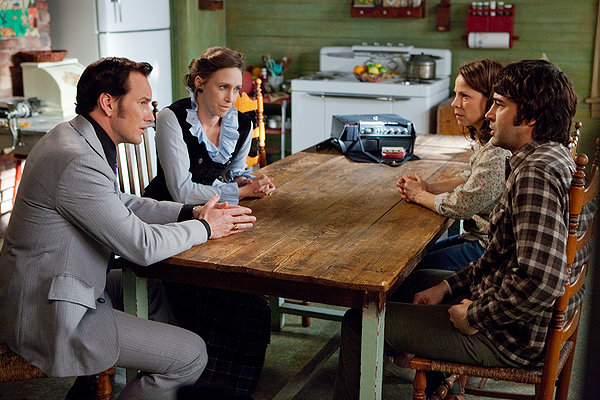 
Visually, The Conjuring puts forth a halfhearted effort to emulate the look of 1970s films, punctuating the first twenty minutes with zooms and lilting shots of sunlight dancing through leaves. Eventually, cinematographer John R. Leonetti, whose career didn't begin until 1988, abandons the effort, and we're left with a crystal-clear, hi-def sequence supposedly shot on 8mm. Say what you will about the filters applied to, say, Sinister and Machete, but in the absence of period 8mm cameras, I'd prefer that filmmakers digitally recreate the texture of cheap film instead of leaving it to our imaginations.

But The Conjuring's biggest flaw is its reverence for the Warrens, whose real-life quackery has done real-life damage. Based on their incredibly unscientific work, murderer Arne Johnson mounted an unsuccessful "not guilty by reason of demonic possession" defense, and families have insisted that ongoing sexual abuse was supernatural in origin.


As a skeptic who nonetheless enjoys a cracking ghost story and doesn't begrudge a horror film the tantalizing "based on a true story" intertitle, I wouldn't normally expect a haunted house film to consider scientific explanations for, say, Carolyn's full-body bruising. Here, though, such historical revisionism is arguably dangerous in how it might shape future perceptions of the Warrens and the con-job field of paranormal investigation. Hell, it might even shape supernatural explanations for physical, sexual and/or psychological abuse. And what's more disturbing than that?

Certainly not The Conjuring's witches-and-demons plot, no matter how many times the trailers told us the Warrens kept this case a secret for 42 years because of its disturbing nature. It's not that disturbing -- it's on par with The Amityville Horror, which the Warrens also "investigated," and it barely earns its R-rating -- so let's explore the likely truth: The Conjuring is cooked up from plot notes for yet another bullshit book the Warrens never got around to writing. Wilson and Farmiga do an adequate job of finding their humanity in a subplot that explores Lorraine's haunting and the toll that living above a museum of supposedly accursed objects must take on their young daughter. Still, Hollywood would be better served abandoning the Warrens in the annals of weird American history, where they belong.

MINORITY REPORTS: They said I was mad to have an office that could only be accessed by astral projection, but do you realise how peaceful it is in here now? I stay on GMT so I'm never dreaming at the same time as these mooks. Want to see me? Sleep during the day, I'm a busy man. - Ian "Professor Clumsy" Maddison

Insidious is one of the few reviews I wish I could get a do-over with, because it didn't occur to me until directly after I finished writing it that most of the things I complain about were actually part of what was so brilliant about it. From then on I've been known in the office as "The guy that didn't get Insidious," and at least once a month third-grade Jr. Critic Tommy Simmons fills my desk with drawings of the red-face demon. - Martin R. "Vargo" Schneider