Nobody watches movies anymore, right? You don't really need us to tell you what we thought of Muppets Most Wanted, Divergent or Nymphomaniac: Volume II but we're going to tell you anyway. What do you care? Nobody reads movie reviews anymore or watched movies or makes movies or eats food anymore, right?

REALITY: Muppets Most Wanted is a strange case. If it didn't feature the beloved Jim Henson creations of the title, it would be an entirely disposable family comedy with an ensemble of characters nobody cared about and a wealth of celebrity cameos that none of the kids in the audience would recognise. I mean, it still has that last thing, but it's saved from the previous thing by virtue of the fact that these characters have decades of history to back them up.


Picking up where the previous film's production left off, the Muppets are delighted to learn the news that they are to appear in a sequel. While looking for an appropriate plot device, the conniving Dominic Badguy (Ricky Gervais) suggests they go on a world tour with him as their tour manager. Their first stop is Berlin, where the escaped criminal and world's most dangerous frog Constantine has Muppet leader Kermit the Frog carted off to a Russian prison in his place while he secretes himself at the head of the travelling troupe of performing puppets in Kermit's place. During each performance, Constantine and Dominic break into a nearby museum to find various relics that will allow them to steal the crown jewels in London at the end of the tour.

It's interesting that both this and the previous movie villainise people who want to profit from the endeavours of the titular felt creatures when that really is what everyone involved in this movie is doing. The creative team that continues to design, build and perform the characters are clearly capable of producing something worthwhile. It is in their hands that the legacy of Jim Henson's works would be safe and perhaps even great again. Under Disney's merchandise-focussed tutelage -- and I realise I sound cynical here, but cynicism is really the most logical response -- you just know there would never be any chance of allowing this creative team to actually ... create anything. We have Kermit plushes to sell, after all. 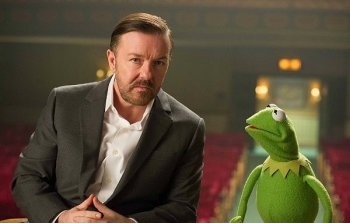 America, please keep this man.Cynicism aside, I really didn't hate Muppets Most Wanted. This is not a film that evokes strong emotions in either direction. While it is filled with enjoyable musical numbers and some decent gags, the film as a whole ends up feeling a little hollow. We identify these characters from our fond memories. We remember Fozzy being a funny and lovable bear, but is he? Miss Piggy has a personality, right? It seems that screenwriters James Bobin and Nicholas Stoller hope we have fond memories of these characters anyway, because as far as trying to make us warm to them goes, it is clear that they felt the hard work had already been done for them.

What we're left with is a family comedy that doesn't really land. It floats aimlessly on the winds of slightly amusing light entertainment. We've seen this done countless times and it's not fair to give this a pass simply because the name that has been strapped to it is one with hefty amounts of Disney money behind it. Most of the humour is derived either from the kind of terrible puns that tomatometer-approved critics love (you could say that they're pun ... tomato ... they're rotten pu- no ... they're tomato ... puns ... this is why nobody takes me seriously as a critic, isn't it?) or the kind of self-awareness that the less popular, but obviously better, critics might make parenthetical asides about. You'll certainly get a few giggles out of it either way.

What was baffling to me, though, was the slew of cameos that permeate the movie's running time. Some of them make sense, sure. Tom Hiddleston, Lady Gaga and teen favourite Stanley Tucci will all be recognisable to younger audience members, but I can't imagine any precocious twelve-year-old clutching the arm of their parent in elation and saying "Look, mummy. It's Academy award-winner Frank Langella." And I defy anyone to get excited about a cameo from Hugh Bonneville. Most of these cameos are presented as jokes in and of themselves, as opposed to being part of an actual scene or having these people make use of their talents. Christoph Waltz dancing a waltz isn't really a good joke; it's just an expensive pun.

With all of that in mind, it is hard to figure out just who this movie is for. It seems uninterested in garnering the attention of a young audience, unconcerned with branching out to a non-male, non-white demographic and weirdly unprepared to broaden its horizons beyond America. There is a recurring joke about Europeans having long lunch breaks and paid vacations, but who's laughing really? I can just imagine Bobin and Stoller sniggering about the NHS. "Hahaha, they all get health care no matter what. How amusing and un-American."

MINORITY REPORTS: The bigger issue with the cameos isn't how little sense they make, it's how unnecessary they are. Rather than craft sketches and gags out of celebrities' personas, like the original Muppet films did with Steve Martin and Mel Brooks, this is just saying "hey, look, we got a famous person to deliver a throwaway line, because it's a Muppet movie, and that means famous people." Many of these celebrities have roughly six seconds of screentime and one line at most. This worked once in The Muppet Movie, because the person they got to do it was Orson Welles. And if you can't tell the difference between an Orson Welles-gag and a Chloe Grace Moretz-gag, then what are you doing making movies? - Martin R. "Vargo" Schneider

You can't spell "pun" without "Muppet" and an extra N, which leaves you with M-P-E-T and that's a Scrabble draw no one wants. - Sean "Keanu Grieves" Hanson