The Legend of Professor John Henry and the Online Learning Academy 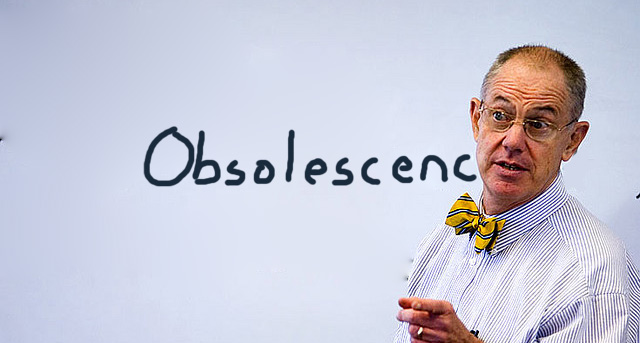 John Henry was a sociology teaching man,
He worked from eight 'till three,
Sayin' "You can only miss two days and pass,
For makeup tests come to me."

One day John Henry read the news,
About kids downloading their degree,
John Henry made 80 grand a year,
And he knew computers worked for free.

John Henry said to his dean:
"You are trying to sell me out,
They can read all the PDFs they want,
But they paid to hear a grown man shout."

John Henry said to his TAs:
"Break into groups and follow my plan,
We can beat those computers,
When it comes to teaching a man."

One of the TA's said to John Henry:
"Can't we just mail out a link?
I just TA for reduced tuition,
And I just pay tuition to drink."

Another TA said to John Henry:
"And what did you mean by 'teaching a man?'
I didn't sign up for patriarchal BS,
And I wouldn't teach your trash to a garbage can."

A crowd gathered to watch John Henry teach,
He decided to start with a hit,
Recorded a Gangnam sociology dance,
But everyone thought it was shit.

John Henry said to everyone booing:
"Go ahead and take it up with the dean,
I've got fifteen years lecturing here,
Do you stupid brats know what 'tenure' means?

The dean came down to John Henry and said:
"You've got to watch what you say, John.
Every one of these kids has a phone,
And the camera is always on."

Now John Henry had heard enough,
he threw his hands in the air.
"I have three fucking Master's degrees,
And not a single one of these idiots seems to care."

John Henry tossed his degrees in the garbage,
Decided to write up a book,
Nobody would print his academia rants,
Although he self-published on the Nook.

And poor old John Henry finally laid down and died,
or at least he went to a community college,
While all the kids who used to ask him questions,
Paid to download their knowledge.

Where once stood John Henry's classroom,
Is a three-story IT warehouse,
All of the kids learn from their homes,
And go to classes with their mouse.

The degrees they get are useless,
The tuition costs almost the same,
When America asks why higher education sucks,
Some Internet idiot will say, "John Henry's to blame!"