EXPECTATIONS: Aardman Animation Studios returning to their roots to create a very British stop-motion-animated feature film is enough to get me excited even without all the trailers and such. Just as well really, considering how underwhelming the marketing has been for this film.

REALITY: There's a wonderful kind of old-fashioned charm to Pirates! that is impossible to resist. In a time where family films tend to be socially irresponsible claptrap, it's nice to get these rare opportunities to sit back with the kids and actually enjoy something without feeling like you're infecting their ideologies. Unfortunately, Pirates! just doesn't have an awful lot going on under the surface.

In spite of the fact that he's not very good at what he does, Pirate Captain (Hugh Grant) decides to enter the Pirate of the Year competition. It doesn't take long for him to realise that he doesn't stand a chance against his competitors (Lenny Henry, Salma Hayek and a thankfully solitary Jeremy Piven), and so he set out to perform one amazing act of piracy. He happens to hijack the ship of one Charles Darwin (David Tennant) who informs the Pirate Captain that his ship's mascot Polly is actually a dodo, not a fat parrot, and so they sail to London to present the rare bird to the pirate-hating Queen Victoria (Imelda Staunton) so Pirate Captain can get his hands on the coveted Scientist of the Year award with which he can then go on to win the Pirate of the Year award. It's not as complicated as I'm making it sound, honest.

Aardman films, as entertaining as they are, have a tendency to leave me with not an awful lot to say. Why is that? Is it because they hew to a safe formula? It's quite possible that I'm giving them a pass for playing it safe in these instances. Maybe I should deliberately try to pick this apart? Maybe I should be outraged by the white-washing of the central characters and the fact that Pirate Captain has to fight to overcome the accomplishments of racial minorities (and Jeremy Piven), but the truth is, it's just irresistibly charming. 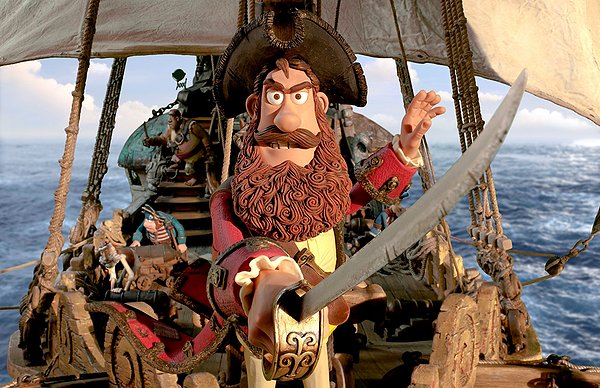 Hardly Johnny Depp is he?

Placing the action in the Caribbean and making your protagonists pirates is definitely familiar territory. It's basically coming from the exact school of thought that produced Arthur Christmas, which is that Aardman needs a sure-fire hit to stay afloat. They've obviously tried to rekindle the specific interest in them by returning to the stop-motion animation format rather than CGI. It's clear that Aardman is trying to find a little of that Wallace and Gromit magic all over again. They haven't managed that, but they've got something here that will probably go on to be an enduring and inoffensive franchise, the DVDs for which you can look forward to being constantly demanded to put on at home for your future children without wishing you would die.

The voice cast does sterling work, especially Hugh Grant, who forgoes his usual schtick to deliver a very cool and measured performance. Who knew he was so versatile? All of these terrific vocal performances are injected into some wonderfully animated visual comedy. There's something endearing about slapstick being performed by tiny clay people.

I keep saying that this is a charming film. What I mean by that is it has an immediately endearing quality brought on by an incredible attention to detail. There's so much going on in the background of every scene that you just want to walk into this world and spend hours scrutinising everything... but in a fun way, obviously. With these characters on this adventure, it all just clicks nicely.

Basically, Pirates! is adequately acceptable as a thing to not be infuriated by while your kids are entertained. It doesn't have an awful lot to say that hasn't already been said, but it's charming and funny and just perfectly fine.

MINORITY REPORT: Are pirates still something people care about? Shouldn't we have found another violent and mysterious historical group to romanticize? How about the huns? Let's do a big-budget Jerry Bruckheimer movie about the Huns. - Martin R. "Vargo" Schneider