EXPECTATIONS: Holy cow, would you look at that cast list? Woody Harrelson, Sigourney Weaver, Steve Buscemi, and Ice Cube? It's like an entire convention of people who are hit-or-miss. All the tagline for this film tells me is that Harrelson is "The most corrupt cop you've ever seen on screen." I'm guessing we should probably tack on an asterisk leading to the footnote: *(Assuming you've never seen Training Day, Serpico, Leon the Professional, or either of the Bad Lieutenant movies.)

REALITY: One of those phrases that we movie critics like to use is that a movie "fails to justify its own existence." We use it because it sounds derogatory and intellectual, while not actually meaning anything. Or so I thought. Then I saw Rampart, which is one of those films that spends its entire runtime making the audience think they know what the reasoning behind the movie is, then makes them leave saying "What was the point of that?"

Harrelson plays LAPD Officer Dave "Date Rape" Brown, named for his infamous shooting of a man he claimed to be a serial date-rapist. This is one of several examples of Dave's brutal nature in his work. He is celebrated by his fellow officers for his behavior, and questioned by everyone else, including Internal Affairs (Ice Cube), The District Attorney (Steve Buscemi), and the LAPD's PR Division (Sigourney Weaver). The film does not revolve around the Rampart Police Scandal of the late '90s, because that might have been too interesting, but it does follow the issues plaguing the LAPD following the events. Instead we have a character study about a man holding onto his outdated fascist way of thinking in the face of a much-needed re-evaluation of values, sort of like a modern-day The Searchers. Wait, when I put it that way, that sounds kinda good. Why didn't you guys make that movie? 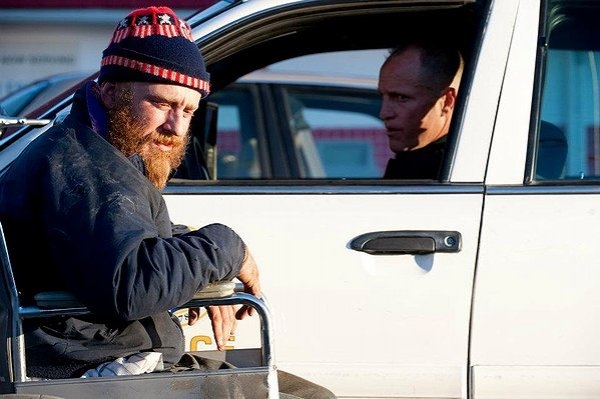 Dave starts off as a interesting character. He lives with his two ex-wives, who happen to be sisters (Anne Heche and Cynthia Nixon), and his two daughters. Using a patriarchal logic of "keeping the dysfunctional, quasi-incestuous family together," he switches back and forth between the two sisters, while keeping up a string of one-night stands when one of them won't put out. The name "Date Rape" could probably refer to the fact that Dave is walking Rohypnol. He starts up a relationship with another horrible person (Robin Wright) and, on occasion, he harasses a handicapped veteran (Ben Foster) who may or may not have seen him murder a man. Oh, wait, the last bit there is important. See, that's what this movie is really about. Never mind the past two paragraphs I've written about other stuff going on, this movie is about Dave being hunted for a crime (two, actually) that he committed, but thinks he's being set up for, because an old cop (Ned Beatty) says so. THAT'S what this movie is about. If it takes more than one paragraph to relay the plot, then either the movie is doing something wrong, or I am. Guess which one I think it is.

That's the real issue here. There's so much happening, and none of it is going anywhere. It's just running around in circles. Instead of developing one subplot, the film decides to just add another, and another, until it all culminates in Dave being whipped in a BDSM club, a scene that comes out of freaking nowhere and stops the movie dead. (Not joking on this.) Characters come in and out for little to no reason. To make matters worse, director Oren Moverman, who did great work with Foster and Harrelson in The Messenger, decides that his favorite stylistic choice is "forgetting everything I know about how cameras work." Some of the characteristics of this style include horribly blatant symbolism, ("Oh, yes, I see. The camera is spinning out of control because the conversation is spinning out of control"); framing shots to put the least interesting objects in the foreground ("No, I don't need to see the people in this scene, I'd rather spend three minutes staring at a house plant"); and finding thousands of new and exciting ways to show us Woody Harrelson's bald spot. Anytime anyone has a monologue, there are cuts every three words, to the exact same shot, but slightly to the left, so it's like they're jumping off screen every few seconds. It's like the editing on a YouTube vlog. 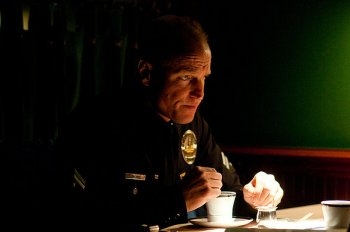 Intense coffee mornings!The biggest disappointment, however, is that Rampart completely wastes a great cast, including one of the greatest casting decisions in recent memory. Buscemi and Weaver have about 12 lines apiece, and quite frankly, I forgot they were there. However, if you're going to pick someone to play a character in charge of hunting down and pointing out crooked, racist cops in the LAPD in the '90s, there is no better choice than Ice Cube. It's even a better choice than making him Angry Black Captain. It's a masterstroke of casting that gets largely squandered because Cube's character is another subplot that gets introduced two-thirds of the way in to the movie and then is shoveled out three scenes later. He does completely dominate those three scenes though, so there's something.

Also, we should probably say something about Woody Harrelson's performance. It's a very good performance, yes, but if anything it felt too contained. With the exception of the aforementioned sex club, you keep waiting for him to unleash some buried level of Bad Lieutenant insanity, but it never happens. It teeters on the edge of interesting, and after a while you realize that the answer to "Where are you going with this?" is "We have no idea." I'd also like to make a point about Ben Foster, who has a producer credit on this film. Here's a young actor who realizes that his "star-making" period didn't quite pan out, and he is making the most of it. Foster is always willing to take challenging, interesting roles and I respect him for it. The size of his role is not an issue like it is with Ice Cube, because whenever Foster plays a role, no matter what size, he disappears entirely. I'd rather see more actors like Foster, who use their less-than-A list status to put in damn fine performances, than people who pop up every other year, still begging for their big star-making turn. Looking at you, Jake Gyllenhaal.

There's no real reason to watch Rampart. There was no real reason to make Rampart. There was potential here, but it doesn't pan out because there's no real development of any sort. It's fine to make a movie where bad people keep being bad, look at Young Adult. However, you have to make something compelling happen while they're being bad. If you really want to see Ice Cube dealing with LA racism and cops, just go Straight Outta Compton.

MINORITY REPORT: I always though a "rampart" was just a really sticky variety of fart? - Ian "Professor Clumsy" Maddison