EXPECTATIONS: I'm well aware of the fact that I am not the target audience for Mirror, Mirror. The trailers suggest that anyone who's a fan of well-written dialogue and visually lush fantasy worlds is going to find nothing but a barren wasteland of bad ideas and wasted talent here. Come to think of it, I'm not the target audience for most movies that star Julia Roberts, either. My only real hope here is that Disney isn't simply trying to repeat the inexplicable success of their billion-dollar Alice In Wonderland debacle.

...Shit, they are, aren't they? This whole movie is going to be "Fudderwacking" all over again, isn't it? Marty, bring me a scotch on the rocks. It's going to be one of those days.

REALITY: Once again, we have a case of an innocent film utterly betrayed by an atrocious marketing campaign. Whereas the trailers painted this film as a ship filled with obnoxious humor and bombastic lunacy sinking in a maelstrom of garish colors, Mirror Mirror instead offers a perfectly serviceable reworking of one of Disney's flagship fairy tales. There's plenty to cringe at, certainly, but it's a far easier film to endure than Tim Burton's Wonderland. 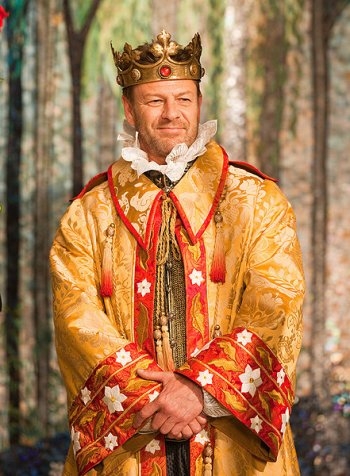 New at t' Berger King, ar speciul berger chutneh med frum pies. That's raght, ah'm King o' fookin' bergers, mate!The film opens with an eye-rollingly snarky narration from the evil queen (Julia Roberts), detailing the history of the Burger King (Sean Bean) and his daughter Snow White (Abduction's Lily Collins). In the king's absence, the queen has her servant Brighton (Nathan Lane) banish Snow White to the forest for fear that she might meet and fall in love with the visiting Prince Alcott (Armie Hammer). Snow White is taken in by seven dwarves, themselves banished by the queen for being "uglies." Snow White enlists the dwarves to help her stop the queen from marrying the prince and further ruining her already broken kingdom.

If you've heard this story before, then you have a pretty good idea how this will all play out. Narratively, Mirror Mirror does little to break from the fairy tale tradition, but then it doesn't exactly need to. It's clear that director Tarsem Singh is more interested in creating a lush visual landscape than in spinning a Snow White story for a new generation. While the film is often in danger of collapsing under the weight of a million snarky one-liners, its visual palette is its one true success.

The kingdom that Tarsem constructs cribs visual elements from across the globe, in an attempt to mash everything together and create one unifying style. The queen's castle is topped with onion domes of Eastern tradition; the village below seems to have been ripped straight out of a Western European storybook; the fearsome Beast is a chimaera in the style of a Chinese dragon. Even the dwarves themselves are a multi-cultural gang, made up of Anglo-American, Native American, and Asian members.

This cultural hodgepodge underlines a welcome progressive streak, in which the younger characters in the film find the queen's policy of "Party more/Spend more/Tax more" baffling, and her open vilification of the undesirable or ugly as reprehensible. Of course, the film doesn't dwell on this for very long, as there are more wacky costumes for our cast to put on before we get to the grand finale. It's nevertheless encouraging to see a fantasy film give us a more progressive treatment of its main character without having to boldly pronounce how progressive it is. As smart a film as Tangled is, it isn't exactly subtle.

Of course, neither is Mirror Mirror at times. The age of the film's target audience sits squarely in the single- digits, so it makes sense that the writing shouldn't sail over even the smallest of heads. Still, the queen is written as thoroughly un-menacing as possible while still getting across that she's supposed to be the villain. In place of any out-and-out villainy, the film tries to get as much mileage as it can out of the metacasting of Julia Roberts as conceited royalty. She plays the part almost too well, and we're not even afforded the luxury of laughing at Roberts while she gets painted in parrot shit (yup), as she explicitly forbids us from laughing. 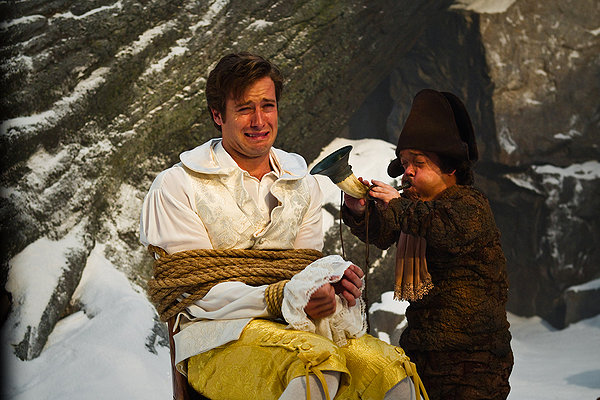 Waaaaah, first they steal my facebook idea and now this!

Armie Hammer and Lily Collins almost seem lost in this film. Hammer acts as the butt of most of the film's jokes, and at times he looks genuinely confused as to how he wound up on this set. Maybe he got lost on his way to the Lone Ranger set. On the other hand, Collins appears more at home here, but she's not given too much to do until the third act when Snow White is finally forced to become an active character.

The dwarves are easily the highlight of the film. Their fight sequences, in which the dwarves wear accordion-like stilts to tower over their opponents, are about as engaging as the film's action gets, and are a perfect example of how this film succeeds where Tim Burton's film so spectacularly failed. Mirror Mirror makes ample use of CGI, but Tarsem is an excellent judge of when not to use it. The dwarves' stilts are a blend of CGI, stuntmen and clever costume design, lending them a fantastical, larger-than-life air in combat, but are little more than fancy props when standing still.

More than that, though, the dwarves are the most surprising aspect of the film, considering they're painted as catchphrase-spewing miscreants in the trailer. We aren't given much time to get to know the dwarves, but what we see of them leaves a strong impression, and that seems like the perfect way to describe a film like Mirror Mirror. It's a short film that utilizes some truly unique costume and set designs to hide a drafty script that often doesn't give it's cast nearly enough to work with. Considering the train wreck I was expecting, I'm pleased and surprised to say that Mirror Mirror is thoroughly not terrible.

MINORITY REPORT: So the queen is a tax-raising elitist snob? Never would have guessed Julia Roberts would be cast as *hic* Obama. - Mallard Fillmore, political cartoon duck