Steve: Real funny. First of all that is obviously a fighter and not a barbarian. Also there is no vine in D&D that can kill you instantly like that.

Zack: Alright, alright, but watch it! Okay, it's really nice in the garden. You see trees and a swamp and a bridge. There's a cute little frog head thing sticking out of the swamp.

Steve: I'm going to walk over and pet it. 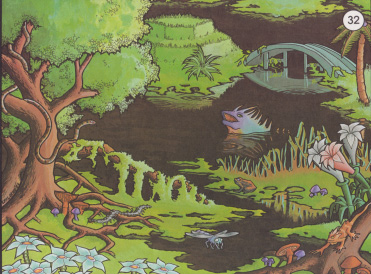 Zack: It swims over to you as you stand by the marsh. It makes a cute face and you reach out to pet it.

Steve: Damn right I do. This park is boss. I went to one where you could pet the deer and the goats and the llamas but a goat ate part of my shirt and my mom told me to just take it off and let the goat have it, but it was my GenCon 03 shirt.

Zack: Did you die?

Steve: Almost. Frigging goat bit the crap out of my fingers. It tore up my shirt too, but I saved the front part with the babe on the dragon and was able to sew that onto the back of a jean jacket I got with Christmas money.

Zack: Well you don't have to worry about a goat tearing off your GenCon shirt.

Zack: Because you took off all of your clothes earlier and the cute little frog is actually a giant Froghemoth that is charging directly at you! 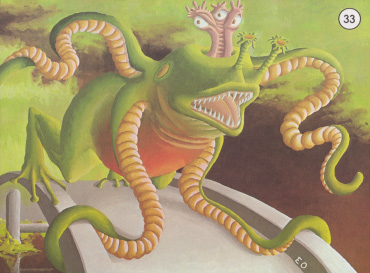 Zack: It attacks and it wounds your chest.

Steve: My favorite chest next to that girl in the space force from Starship Troopers! I'm going to make frog dude pay for this one! I swing my axe and call out to my barbarian gods!

Zack: The gods do not answer, but relying on yourself and your own hard work you pull yourself up by your bootstraps and hack the Froghemoth to death. Its nasty frog guts are all over the place.

Steve: I rub its vile ichor into my wounds.

Steve: I am sustained by each enemy I fell in battle!

Zack: It's a fresh water animal. It probably has all sorts of parasites that can cross over to your bloodstream.

Zack: And that's not even thinking about the bacteria. That marsh must be like a soup of nasty infections waiting to happen.

Steve: Barbarians don't die from stuff like disease, dude. They die in battle or from just deciding to climb a mountain but the mountain is too high so they die doing that. But even then that probably doesn't happen. They'll probably just die fighting an ice goblin or something on the mountain.

Zack: We'll see about that.

Steve: Man, this park sucks. What else is there to do?