Racism is cool and doing it makes you popular. Just look at some of history's most beloved racists. Adolf Hitler lead a country to the brink of greatness, while Kramer made us all laugh with his hilarious antics. Let's hear some thoughts on a bunch of great examples of racist behavior from the forum goons. The fact that such backwards-thinking people could exist in 2008 is unbelievable in itself, and surely by laughing at these offensive and hurtful views we can eliminate any pain or harm they could cause. I urge you to help make the world a better place by reading the following racist slurs and laughing. 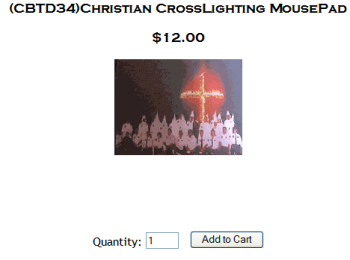 One day, my mother ranted about Hispanic Americans. She seems to be part of the "Speak English" campaign and came up with such brilliant arguments as "Don't you get worried when they talk around you in Spanish? It's like they're whispering about you." and "Mexicans shouldn't be allowed to take Spanish class. That's cheating." And often she and my sister will go on about how dangerous and scary black people are. Any anecdotal story my family tells involves someone asking or telling about the race involved.

It'd be nice to get past things like getting in trouble for listening to rap because "They use the N word, but they don't let us use it." It'd be nice if my dad didn't say "Do they show anything other than black people on TV now?". I know I absorbed some of those things as a child.

My uncle on my Dad's side just recently got the Internet. I was talking to my Dad the other day and he told me my uncle finally found proof that "Asians have no souls". I didn't really know what to say.

My grandfather told me he didn't watch basketball because if he wanted to see storm clouds go across the screen he'd watch The Weather Channel.

I love talking Spanish around non-Spanish speaking people since it usually gets them all riled up. I had one girl tell me "Why ain't y'all talking American? This is America". We were actually in Iraq.

My Grandmother HATES Japanese people and is convinced that they are secretly going to completely level Pearl Harbor to the ground once and for all.

A woman I was gardening for in Cambridge, MA (She's actually a fairly accomplished photographer, but I won't make her name public here) surprised me one day when we were both cooing over my bosses' new (and 100% caucasian) baby when she said: "It's terrible these days how they're mixing and matching races! All these mongrel babies make me sick." In Cambridge, of all places!

Over Thanksgiving dinner, I happened to mention Indian food and how much I enjoy it, and my sister in law's mother busts out "I can't help but think of it as dirty!"

What the fuck do you think they do, prepare it on the floor of a hut in Mumbai and then ship it to Boston? Christ, woman.