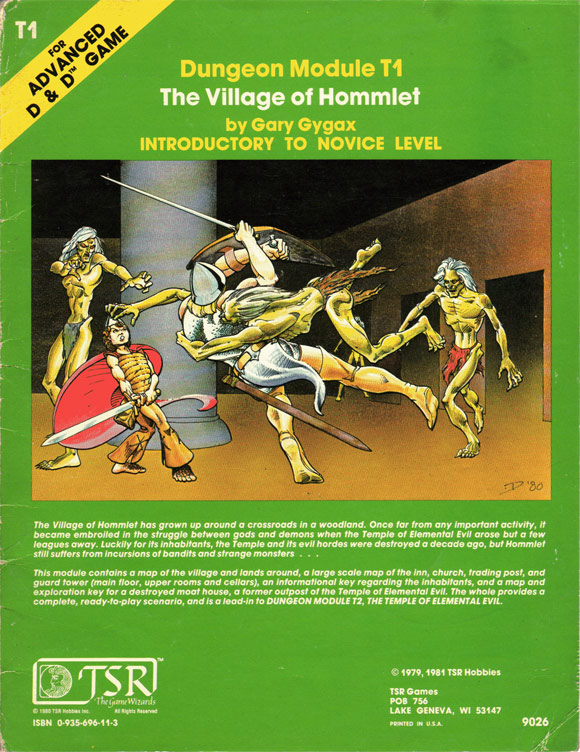 Zack: An incredible flying take down from Buff Bagwell! Mike Tenay, I haven't seen moves like this since Ruckus in Rhode Island.

Steve: That warrior should have studied Judo. You use your opponent's momentum and concentration camp physique against them.

Zack: The most disturbing thing about this image is the minimalist background disappearing into shadows. What sort of simply shaded sphere or series of open doorways might be waiting just around the next corner?

Steve: Maybe the artist ran out of time drawing all those extra abs on the halfliing and he never finished the background.

Zack: That's Jeff Dee's work replacing David Trampier's on the 1981 reprint cover. I'm not going to pretend I knew that, I just looked it up.

Steve: Well I know the adventure, it's just a town next to the Temple of Elemental Evil and you have to come up with a plot for the adventure pretty much. Which is fine by me because I like to give Keith and Jamie (if he doesn't have to close that night) and Andrew (if he is there and not with his fiancee) plenty of room to create their own adventure usually by causing trouble.

Zack: Sounds like you guys get up to some wild times. I hope your neighbors don't call the police and make you turn down your imaginary party.

Steve: Very funny but maybe we had the Kuo-Toas breaking out the nets and throwing them at naked lobster babes.

Zack: I'm picturing a policeman shaking his head and walking away from your door as dice clatter in the background.