Dungeons & Dragons Module B1: "In Search of the Unknown" - Part 1

Adventure B1: In Search of the Unknown is not the worst D&D module. It doesn't include a silly gimmick or impossible death traps. However, for years it was one of the most widely-played modules, because In Search of the Unknown shipped with the original 1979 D&D Basic box set. Intended to introduce novice DMs to the process of running an adventure, it included such "features" as fill-in-yourself monster encounters and extensive NPC henchmen rules to flesh out smaller parties. The latter feature can produce some silly results, which makes it perfectly suited to the purposes of Steve and Zack playing through the module. 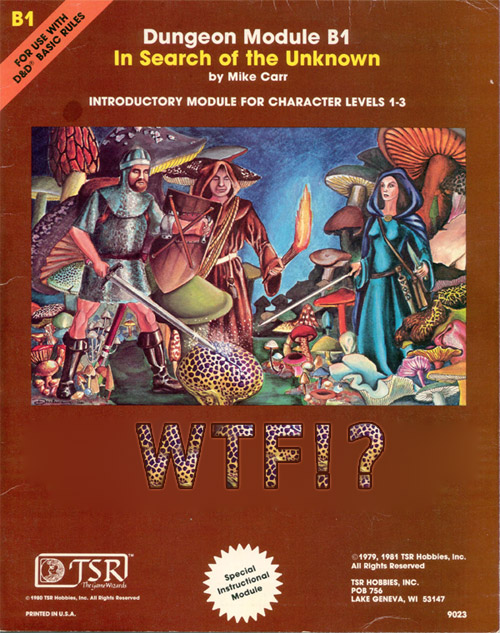 Zack: I, uh, dare you to touch that mushroom thing. The leopard spot mushroom.

Steve: Rule #1 of D&D: keep your distance from all plants and fungus. They are probably trouble.

Steve: You should probably just stay home so you don't develop the D&D version of Gulf War Syndrome.

Zack: Alright, Steve, it's been a long time since we've run an adventure module, so let's get right to it. I lost the draw, so I am going to be DMing. Tell me about your character.

Steve: I am playing a level three gypsy, based on the rules for the dwarf character class. His name is Tom Clancy and he is wearing studded leather armor and he has a spear for a weapon. He is also very charming. A real trickster.

Zack: This module includes a bunch of rules for fleshing out your party with NPC henchmen and so we went ahead and rolled on the tables to generate three friends for Steve.

Steve: Yeah, I somehow got three magic-users as traveling companions. There's Nickar and Shobaffum, who are level one, and Trebbelos, Boy Magician, who is level three.

Zack: Wizard school has just let out for the summer and you are accompanied by the three student wizards. They are good friends and so even though they are coming along with you they really don't like you very much and they have a lot of in jokes.

Steve: That's because you made me roll once for all of their personalities on this table:

Zack: And you rolled obstinate cowards who are selfish, but loyal.

Steve: Which I think is unfair because I should get to roll for each of them separately.

Zack: Nope, sorry, I can't keep track of all this shit. Which is why Nickar and Shobaffum both know ventriloquism as their only spell and Trebbelos knows Light, Charm Person and ESP.

Steve: These are some useless wizards, dude.

Zack: Why don't you just wait and see as you journey...IN SEARCH OF THE UNKNOWN.

Steve: I get it. Because that's the title of the module we're going to play.

Zack: You ruined my dramatic segue.