In the past we have covered some of the multi-volume series of Gamer's Handbooks for TSR's 1984 Marvel Super Heroes. These book are basically the Monster Manuals of the Marvel universe. In addition to the main series, TSR released updates with even more heroes and villains. This week we look back on the 1989 update and some of the weirdest super teams in the book. 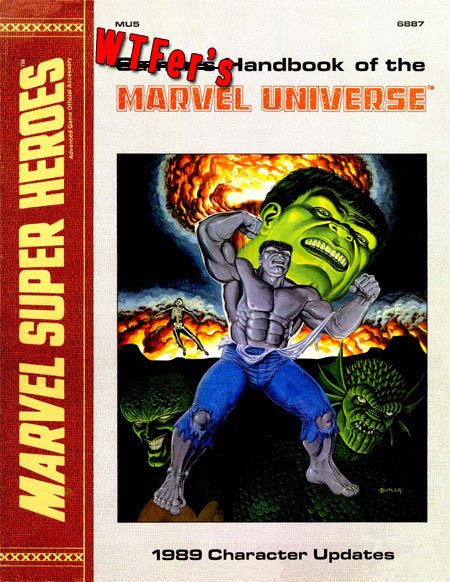 Steve: Atom bombs to rage shreds. The Hulk really puts a pair of blue jeans through the paces.

Zack: Do you think there has ever been an incident in the real world where somebody was lifting weights or something and they became so pumped their clothes burst at the seams?

Steve: If I were the Hulk I would try to get my pants and shirt off as I felt my rage coming on.

Steve: So what are we doing here?

Zack: I had a look through this book before we started and I think we need to have a discussion of terrible super teams.

Zack: You wish. I'm talking teams where they came up with a concept and then made up a bunch of heroes to fill it out. Super teams that appeared in one comic or maybe one short series.

Zack: You're going to be wishing these teams had a fake Iron Man.