Dungeons & Dragons Module B3: "Palace of the Silver Princess" (Part 2)

Adventure B3: Palace of the Silver Princess is the only D&D module to have been recalled because of objectionable content. It was released and recalled in a single day in 1981 so that an illustration titled "The Illusion of the Decapus" could be removed. You'll get to see the image later in the article, but by D&D standards it really isn't that offensive. Women being menaced by monsters are as much a staple of D&D as random encounter tables and dungeon rooms where monsters are just standing around idly waiting for adventurers to walk in. The plot including a chaotic evil militant feminist ruler is probably more offensive, but gets a pass because author Jean Wells has lady parts. The original, naughty version of Silver Princess "featured" empty rooms in the dungeons so that DMs could insert their own encounters. Part one of this module has already been covered by Zack and Steve. 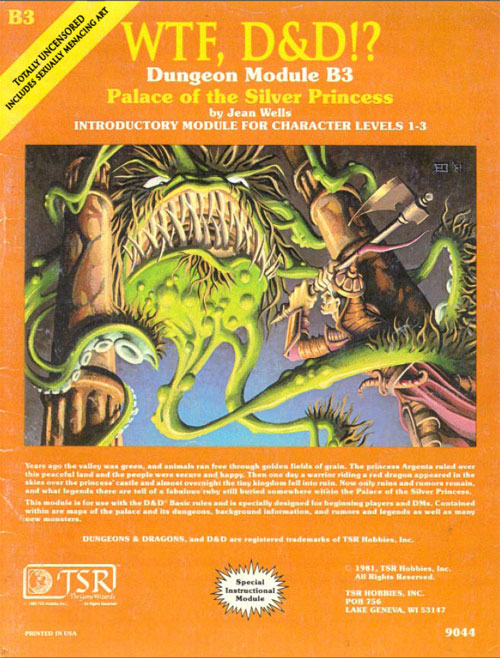 Steve: We're back! Maybe this time we'll get to see this banned Decapus image.

Zack: I promise, no more Teasing of the Decapus. Maybe you should bring people up to speed on what happened in the first part of the module.

Steve: Well, okay, I played Yngwulf Maimsteen, heavy metal bard of the 3rd level. First I held an impromptu concert at a gay bar and found out some sort of baroness named Darcy or something wants this giant ruby from the silver princess palace and she'll give me a huge reward if I get it for her, so I journeyed to the ruined castle and blew the wigs off some skeletons with a ghost metal set, fell in a bunch of pit, found out there's some evil molester priest called Charmander living in the ruins doing Frankenstein experiments, fell in some more pits, and then got to the stairs up to the second level of the palace of the silver princess.

Steve: Oh and there's something about a dragon, like in days of yore a dragon man had the hots for the silver princess so he kidnapped her and destroyed her palace, so I think I might get to fight a dragon.

Zack: Sounds about right to me.

Steve: Oh also I think I took like 8 damage most of it from fighting a giant six-leg rat.

Zack: You stand before a staircase leading up into the dark and foreboding darkness.

Steve: I will play a single lick of my guitar to shoot a spark of lightning at all the torches in the room and then I'll take a torch and go up into the darkness, pushing it back with the majesty of my burning torch.

Zack: You clob up the stairs.