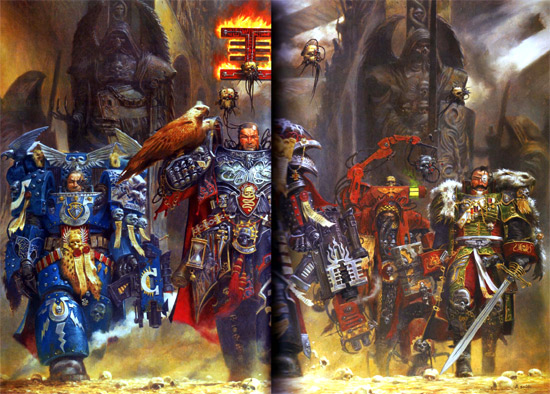 Zack: So awesome Little Green Bag should be playing.

Steve: Is that the music they play in Armageddon when they are all dressed up in astronaut suits and walking towards the camera? That part ruled.

Zack: Someone had better file an OSHA complaint on those skulls before somebody falls and breaks a...what's likeliest to break?

Zack: Gold epaulets, maybe. Oh, no, wait, that center guy has an hourglass on his belt. That thing will shatter like a light bulb.

Steve: Well, we did it, and I want to thank you for letting me do 5th Edition. I know you wanted to do Rogue Trader but I guess we can check that one out after we do all the 5th Edition codexes.

Zack: Oh, no. No you don't, Steve. The next time we cover 40K it is going to be all the worst of the worst. All the bad old artwork and stupid races that they got rid of 15 years ago.

Steve: Weren't we supposed to talk about a contest or something!?

Zack: Nice segue. Yes, that's right. We are sponsoring the WTF, D&D!? Role Playing Fine Art Contest on our forums. The grand prize is a bunch of cool stuff including an Amazon gift card, a giant Rifts t-shirt, autographed copies of both of my books, and the greatest novel every written. Plus we'll be handing out other fun prizes.

Steve: It's a lot of fun and we already have a bunch of entries. You've got until the end of August 21st to enter the contest.