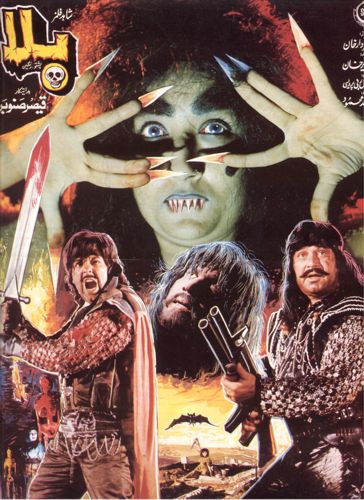 Dr. Thorpe: Wow, I had this exact same dream after watching Lord of the Rings in the Singapore airport with malaria.

Zack: I wonder what the conversation was like when the two warriors were picking out their weapons. "Yeah, I'll take the giant sword." "Hmmm, yeah, I'll take the mace...oh wait a second, I think I'll take this M-16 with a grenade launcher." Merlin had to work overtime to conjure that one up.

Dr. Thorpe: Well, if there's only one of each, you obviously give the M-16 to the sloppy guy because he isn't fit enough to handle a sword.

Zack: He looks pretty scared. Who wouldn't be with fangy green Walter Mathau back there attacking them? The eyesbrows are actually part of the hairline.

Dr. Thorpe: I don't want to filibuster this joke too hard, but I'm still proud of myself for "Nosferafro." But she's also got sort of a Wicked Witch of the Disco look going.

Zack: Roller Disco maybe. I can picture her hissing angrily and clinging to the side to keep her balance while all of the little kids skate past and laugh.

Dr. Thorpe: This picture is just a Halloween party gone wrong. There's no cohesion. We've got a witch, we've got a hairy swamp-man, and we've got two knights, one of whom inexplicably has a gun. This movie is all leftover props and costumes.

Zack: All it needs is a guy in a rubber alien suit and a warped spooky sounds record that keeps catching in a groove so that it replays shrieking bats over and over.

Dr. Thorpe: Also, the logo seems to be written in sort of Rat Fink style graffiti. Just what the heck are they playing at? You're supposed to be able to look at a movie poster and go "oh, it's THAT kind of movie."

Zack: "Oh, it's a colossal fuck up." I am interested to know how they worked the singing and dancing into this one. I can almost see it with nosferafro and her jazz hands, but otherwise I'm not getting it. She would probably do some sort of Chewbacca-like belly dance and then maybe the knights could have a dance where women use those big cat hair remover rolls on their suits of armor.

Dr. Thorpe: Well, the face in the middle looks like it could be a wistful singer-songwriter type, like Cat Stevens or something, and he's trying to serenade Nosferafro with his soothing adult-contemporary voice.

Dr. Thorpe: Pardon me. It's just that "Cat Stevens" is so much easier to remember. Plus, I'm talking about the guy who sang gentle ballads, not the one who wanted to kill Salman Rushdie.

Zack: Yeah, but Cat Stevens doesn't exist anymore buddy, and Yusuf Islam's songs will totally change the context of the movie. These guys aren't vampire fighters anymore. Suddenly they are battling the great satan in the Kiber Pass. "Allahu Ackbar!" and a ghoulish fiend from the decadent west is turned to dust.

Dr. Thorpe: The Wicked Witch of the Decadent West?

Dr. Thorpe: What a mess. Shall we cut our losses and let this one go before we go even farther afield?