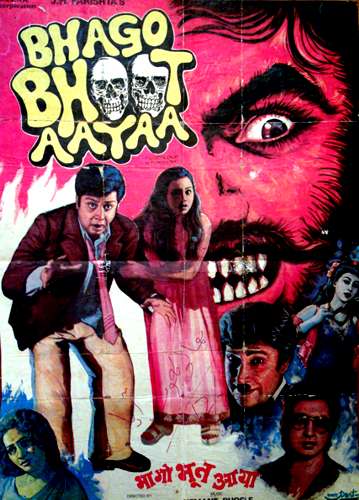 Dr. Thorpe: This is just screaming for a "Yeah, I'd 'Bhag-o' her 'Bhootaay" joke, isn't it? And the dude on the left with his pervy face and his extended hand is totally going in for a grab of a big sumptuous ass.

Zack: Get your mind out of the gutter. This is obviously the Bollywood version of Scooby Doo. Special Guests: Roy Orbison and the Harlem Globetrotters.

Dr. Thorpe: The big pink guy is really jonesing to eat some little heads right now. And he's in luck!

Zack: I think that's either Charlie Chaplin or Hitler second from the bottom on the right. Above Roy Orbison.

Dr. Thorpe: Yeah, maybe it's Hitler after he fled Germany and let his hair grow out and learned to relax a little.

Zack: That was really his problem. He just couldn't relax. But NOW he decides to relax? With the giant pink head about to eat him? With Roy cry-y-y-ing, over Bhago Bhoot?

Dr. Thorpe: The big pink guy is the evil spirit who has been sent to Earth to take Roy Orbison's reincarnated soul back to hell, from whence it escaped. And you'd think Roy Orbison shouldn't be in hell, but you'd be wrong.

Zack: I don't know, I could totally picture Roy Orbison strangling a child just so he can try to write a song about it.

Dr. Thorpe: I don't want to be sued for libel, so I'm not going to come right out and use the words "ate a kid," but all I'm saying is that if you look into Roy Orbison's life a little you'll find out things that men shouldn't know.

Zack: It would be like that episode of Night Gallery where the painter kills people and uses their blood to paint the pictures, only Roy siphons off their emotional torment through his hollow eye sockets and then uses it to fuel his pathos-laden songs.

Dr. Thorpe: You don't get a honey-sweet voice like his by not eating kids. So anyway, big pink guy is here to take Hitler and Roy Orbison back to hell, bumbling ass-grabby kid on the left is a "paranormal investigator," like Christian Slater in Uwe Boll's masterpiece "Alone in the Dark."

Zack: He looks like the worst shop teacher in the entire vocational skills program. He probably would cut off his fingers gluing blocks of wood together, which I think precludes any slow motion gun battles like you might see in an Uwe Boll movie.

Dr. Thorpe: I actually just watched an Uwe Boll masterpiece called "Blackwoods" last night, and it had the most ridiculous twist ending I've ever seen in a film. You know when you see a really good twist ending and you look back and put together all the little hints that led up to this? In "Blackwoods" it made no sense at all, so you just look back and look back at all the mistakes in your life that led up to watching an Uwe Boll movie.

Zack: You have to look at the bright side of things: at least your life didn't lead you to starring in an Uwe Boll movie. You could be Christian Slater. Forgotten has-been actor one minute, then you're in an Uwe Boll movie and six weeks later you're grabbing some fat woman's ass on the street.

Dr. Thorpe: In ten years we're going to do another Bollywood SWAT and we'll come across some poster and say "wait a minute... look between the guy with the mustache and the giant cobra... isn't that Christian Slater?"

Zack: That seems possible until you realize that these Bollywood guys, though lower on the food chain, can probably sing and dance about ten times better than Christian Slater. He would trip and fall during his first dance sequence and dislocate his shoulder on a sequin-covered papier-mâché statue of Vishnu.

Dr. Thorpe: The girl the guy is with looks like one of those creepy girls at college who was home schooled all her life and wears homemade clothes and smells like oatmeal and has really really long hair and writes stories about horses.

Zack: I bet she has armpit and pubic hair that look like rolls of barbed wire surrounding a bunker of poor hygiene. Maybe she thinks pubic hair is like the grass you cover a pit with in the hopes an animal will fall in. Just make it look natural and some poor unlucky drunken communications major will fall into her vagina in the bathroom of Arby's.

Dr. Thorpe: No way, girls like that don't even know what sex is. They hang out with dumpy sexless guys like the guy on the poster, and they grow their pubic hair long so they won't ever have to see their shame-areas.