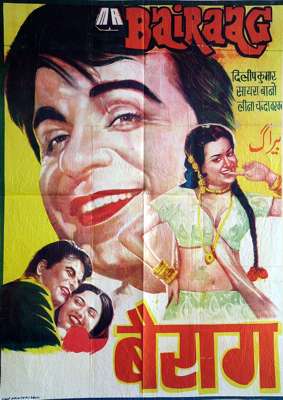 Zack: "Come and see Bairaag, the scariest romantic comedy of the year."

Dr. Thorpe: Oh god, this is why the actresses in these movies don't usually show a lot of skin. When they do, you can see that they have giant three-foot fleshy protrusions jutting out of their chests.

Zack: It's worse than that little half-formed dude on the guy's chest in Total Recall.

Dr. Thorpe: She looks all flirty about her horrible deformity, too. "You like my love-flap, big boy? It's like a third arm, it can do things to you that you've never experienced before." On the dancefloor, of course.

Zack: "See anything you like?" She kicks the dust with her curled-toe shoes as her love flap slithers across the ground and wraps around your ankle.

Dr. Thorpe: This poster is really horrifying. That big doughy face is bad enough, but look at the guy on the bottom crushing the life out of a fat girl.

Zack: He's squeezing her neck so hard I think she's going to split open along her hair part.

Dr. Thorpe: He's jealous of her lipstick, I guess.

Zack: Every single person on the poster, especially that guy, has so much makeup on they look like a corpse in a casket. One of those really bad funerals where the corpse was mangled by a combine but the family insisted on an open casket so the funeral home caked pancake makeup and wax onto a watermelon head.

Dr. Thorpe: Even if they wear it every day of their lives, like this guy does, men just never pull of lipstick as well as women. And sometimes that just leads to the sort of murderous envy where you end up squeezing the goo out of your fat girlfriend like an éclair.

Zack: You can tell he was probably saying really nice things when he smashed her to a paste. Like "oh, I love the shape of your teeth" or "the way you part your hair reminds me of a child's drawing of a bird" and then he smushes her.

Dr. Thorpe: You know, that girl on the right has a pretty nice face, I bet I could look over her horrifying deformity and give her a chance. She probably has pretty low self-esteem because of it, even if she pretends to be flirtatious about it, so I could probably manipulate her and maybe even hit her a little without her leaving me. And that's really what's best in life, Zack.

Zack: If you can't have a woman who will overlook a few love-taps then what is life really worth? I want to wrap that thing around her neck and choke her with it during really hard dancing.

Dr. Thorpe: I bet when she dances really vigorously it sometimes swings up and slaps her on the face.

Zack: She probably acts like she's coquettishly chewing her fingertip all the time when she's really just keeping her hand ready in case it flips up and breaks her nose.

Dr. Thorpe: And it probably does some damage, because I imagine it being sort of heavy and fleshy and filled with blood and lymph and teeth.

Zack: Oh yeah, definitely, that thing is probably her twin that she absorbed in the womb and somehow transmuted into a prehensile eight-foot tapeworm.

Dr. Thorpe: Maybe it's still attached to her twin, who's just out of the frame. They share intestine through that tube, and cutting it would kill them both.

Zack: I can only hope some drunken mayor wanders past, high on the successful opening of a mall, and decides to sever them with his comically oversized scissors.

Dr. Thorpe: That's pretty abstract, but I'm going to grant you that one.