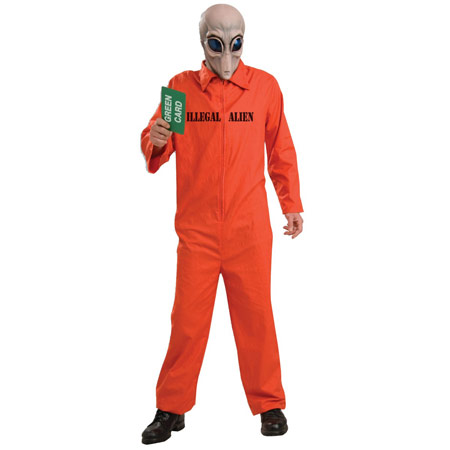 He didn't just cross a border, he crossed a galaxy!

He's got his green card, but it's from another planet! Sure to get some laughs, the Illegal Alien Adult Costume includes an orange prison-style jumpsuit with "Illegal Alien" printed on the front, an alien mask and a "green card".

Dr. Thorpenstein: Hmm. Not quite sure I get it.

Dr. Thorpenstein: You're good with jokes, Zack. You want to explain this to me?

Zackula: I think he's an alien (green martian) who is trying to use his card at an ATM so he got put in a jail.

Zackula: Maybe something about religion is going on too.

Zackula: I think actually it might be about the bailouts??? Political commentary on them? Green = money and the alien is asking for a bailout, which is illegal because the SEC does not reimburse space aliens.

Dr. Thorpenstein: I'm kind of getting a health care reform thing maybe? Like maybe he's got this disease that's making him look like an alien? And he's trying to use his health care card at a clinic but they won't take it because of the death panels?

Zackula: Is there a reverse view so we can see if he's shitting his pants?

Dr. Thorpenstein: I'd feel like I had a much better grasp on this concept if only there was just one more element on here, like maybe a coconut bra.

Zackula: I wonder if the alien is good at performing oral sex on a woman?

Dr. Thorpenstein: OH! Dude, we're idiots. I get it.

Dr. Thorpenstein: It's supposed to be Balloon Boy!

Zackula: Ohhhhhhh duh UFO why didn't I think of that!?

Dr. Thorpenstein: Yeah, and he's going to prison for hiding in a box and wasting the media's time! It's topical.

Zackula: Puking and farting in prison. A nasty little Balloon Boy. Not pussified at all. Not a bit. Going to puke and fart all over. On the radio. On TV. Put it on the WEB.

Dr. Thorpenstein: I'm sorry, I meant to say tropical, not topical, because I was still kind of assuming there was a coconut bra included, but there doesn't seem to... no, it must just be an error in the photo, the costume doesn't even make sense if there's no coconut bra, so let's just say there is one.

Zackula: What's the point of the costume without the coconut bra? You need to do that for the show.

Dr. Thorpenstein: Actually, the other day a friend of mine seriously asked me, and I'm not going to mention any names but it was my friend Bobby, "hey, what should I wear if I wanted to be Balloon Boy for Halloween," and I was just kinda like "oof, ouch, topical," but really I should have just sent him a link to this costume.

Zackula: I plan to wear this one to the annual Latin Kings halloween party. We're actually sharing the country club with MS13 and doing a double party. Those guys have been following the balloon boy story and I bet they would get a real kick out of me wearing this costume.

Dr. Thorpenstein: I wore one like this to the ACLU Halloween shindig last year and they totally misinterpreted it, but those guys are always super uptight about everything.

Zackula: Oh, yeah, those guys. They HATED my tree costume.