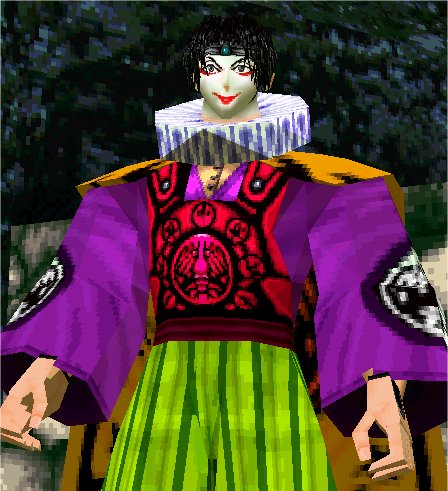 Zack:I think he's wearing it to hide his giraffe-like neck. It must be at least a foot long.

Dr. Thorpe:Yeah, if you extrapolate the angles on that thing from what you can see, it's about twice as big as his head. Then again, to be fair, his head is the size of a softball.

Zack:His sleeves are so big his sharp hands look like the ringers of church bells.

Dr. Thorpe:I think this guy is having the same dilemma that plagues a lot of kind of nerdy guys in high school. They wake up one day and look in the mirror and realize they're just irredeemably ugly, and then they have to make that choice between dressing really normally and hoping nobody notices or dressing like The Crow and trying to score with drama-club chicks.

Zack:When you've let yourself go that far you might as well throw on a bright red cuirass with some sort of angelic lobster on the front and hell, set the whole thing off with a bright orange cape.

Dr. Thorpe:Look at that little bit of his chest sticking out. It looks like he's got a scar from open heart surgery. I've heard heart attacks can affect the disposition, but this problem looks like it goes a little bit beyond "disposition."

Zack:What is this clown even doing in a sword-fighting game? He would be jeered out of the clown tent at a circus for looking too garish.

Dr. Thorpe:I don't even want to consider the kind of nightmare venue where he wouldn't look out of place.

Dr. Thorpe:Yeah, nobody would want to fight this guy, he's got that "dangerously crazy" vibe.