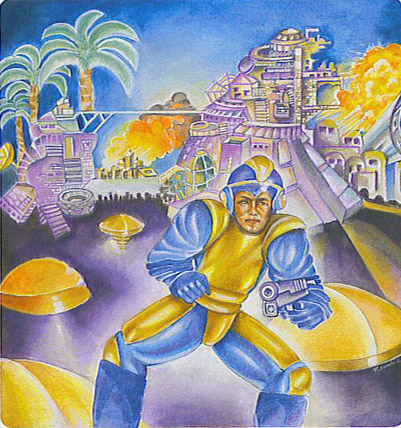 Zack:That outfit's not poorly made, the person wearing it is. Jesus Christ, get Megaman to Doctor Light, stat!

Dr. Thorpe:You know, the crude graphics of the NES really couldn't convey the actual artistic intent of Megaman. The game was actually supposed to be a neo-cubist fever dream starring a proportionless Egyptian astronaut.

Zack:This is the sort of painting you see someone selling the original of at a garage sale for a dollar. Like their "artist" grandson gave it to them and they want to get it out of the garage before he visits again. "It's about war, grandpa. Like the one you fought." And granpda wants to say "I don't remember fighting any faggots like that in the Bocage country." Instead he just says thanks and seals the painting in the crawlspace.

Dr. Thorpe:I don't know, I think this is a pretty compelling piece of work, even if it only vaguely suggests Megaman. I want to know what else the artist did. Was there just this guy who worked for Nintendo's American division who took massive doses of peyote and went out into the desert for three weeks and then came back all wild-eyed with this gorgeous painting of Megaman in 4-D hyperspace?

Zack:"This is what a city would look like if it could transcend the barriers of time and space, and like, I think dudes like this Megaman guy would be the people to fight over it."

Dr. Thorpe:If this guy had done the box art for every video game of the era, I think we would have a totally different mental concept of video games. Imagine what his cover for Track and Field would have looked like. There would be intense looking guys in track shorts and t-shirts licking each other's eyeballs in front of a track shaped like a moebius strip.

Zack:It's really a shame he didn't get more work. I would have loved to have seen his interpretation of Rygar. It would have looked like a Boris Vallejo painting that was somehow fed through a synthesizer keyboard.

Dr. Thorpe:This kind of reminds me of the artwork on the packages of bootlegged action figures you can get at seedy flea markets. You know, the ones that look vaguely like ninja turtles but they say "TURTOL FORCE DECADE" on the box and have pictures of the Ninja Turtles eating a woman.

Zack:Yeah, I bought the Spiderman version of one of those at a Mexican fleamarket and it came with eight Spiderman figures, a helicopter, and claimed "real life is activity"

Dr. Thorpe:I saw a bootleg Superman like that recently at the county fair. The best part was that his red under-shorts were painted flesh-color, probably so they could use less paint colors on the thing. But he looked like Superman's pervert brother.

Zack:I would like to say that if the guy who painted this is reading Fashion SWAT I have a lot of commission work to send his way. I think it would be great to just tell him the basic concept of things - books, movies, games - and then let his imagination create another masterpiece.

Dr. Thorpe:Yeah, imagine what you'd get if you tried to describe the Wayans Brothers' "White Chicks" to this guy.

Zack:It would look like some sort of Eastern European poster for a rock concert being given by racist statuary from the South's antebellum period.

Dr. Thorpe:Nah, it would probably look just like that KHATARNAK! poster from Bollywood SWAT with the two-headed hairy guy tearing a Mexican pimp in half.

Zack:Let me have my dream, Dr. Thorpe.