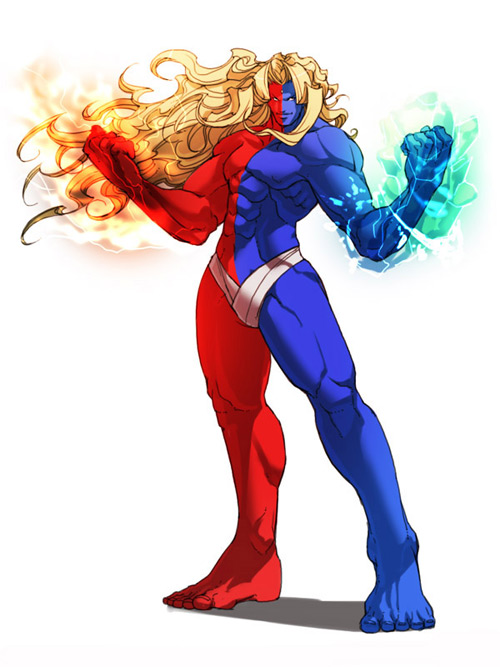 Zack:If one of those split-gender costume people ever needs to pray to a god, here he/she is.

Dr. Thorpe:Somehow a bikini-cut Ace bandage is more offensive than just going nude. It makes you think that something terrible is hiding beneath it, like disgusting inhuman genitals that look like a sea anemone.

Dr. Thorpe:I'm glad you said "country-singer hair" because I can't shake the feeling that this guy is a redneck.

Zack:Yeah, that tiny third eye probably opens into some dimension where Hank Williams Senior and Dale Earnhardt are sitting around on milk crates seeing who can spit farther.

Dr. Thorpe:I think the third eye is some sort of mystical compass that leads him to sporting goods stores where he can find size forty-eight shoes. I can imagine him working at the carnival, making frozen bananas with his left side and hand-dipped corndogs with his right.

Zack:He probably talks in some over-amped Dragon Ball Z breathlessly exerting voice but with a hint of a twang. "Ya'll waaaant a FRIED PICKKKLEEEE!?," and then he's surrounded by a corona of pure energy.

Dr. Thorpe:Gosh, I hope he changes that bandage pretty often. I bet he gets a little gamey on the hot side.

Zack:Really that bandage implies that he has some sort of wound under there. Mayhap he's a freshly made eunuch? Some sort of harem guard for a guy who likes his girl side hot and his lettuce crisp and cool. Fire for the harlots and ice for the perishables.