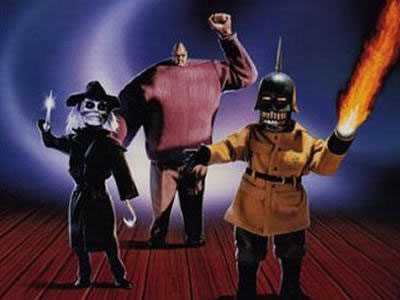 Zackula: The best thing about the Puppetmaster series, and clearly intentional, was that the puppets were more likable and alive than the interchangeable roster of victims they faced.

Dr. Thorpenstein: Yeah, definitely. Kind of like Hellraiser. If you weren't rooting for the Cenobites, you were doing it wrong. 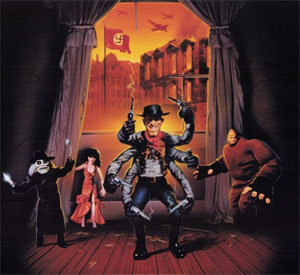 Zackula: Puppetmaster III, which is the source of the awesome cover art with the cowboy and the Nazi flag, explained their back story. The puppets killed a bunch of Nazis. It was on a shoe string budget, so most of "Nazi occupied France" looked like a brick wall and a vintage car, but it's another example of a silly story taken to extremes that would never happen today.

Dr. Thorpenstein: They may be evil, murderous puppets, but at least they have the moral grounding to know that Nazis are all wrong.

Zackula: It's like when the Decepticons would team up with Autobots to fight the more serious threat of underage drinking.

Dr. Thorpenstein: Sure, we want to conquer the earth, but would an earth full of drunk kids really be worth conquering?

Zackula: Did you ever wonder who the puppet master was? It's there in the title, but the meaning is ambiguous. Is it Andre Toulon, the guy who made the puppets but wasn't evil? Was it the dude who wanted to be immortal from the first movie and manipulated everyone to coming to the hotel? For a while I thought it was the audience, like the puppets are murdering for our pleasure, but then I tried to figure out how Demonic Toys and miniature space detective Dollman figured into that concept and drew a blank.

Dr. Thorpenstein: Call me old-fashioned, but if something is in the name of a horror movie, it should be in the horror movie. Like, it's bullshit that there are no trolls in Troll 2, and there's no mall that chops in Chopping Mall.

Dr. Thorpenstein: That's why I like Asian movie titles. If you rent a movie called Crime Boss Cop, you know precisely what you're getting.