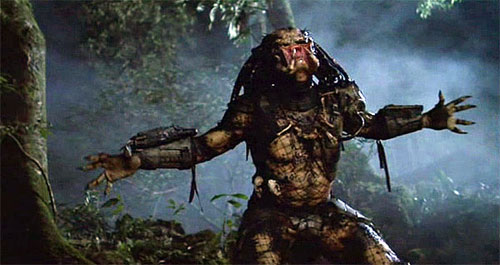 Dr. Thorpenstein: I feel like I'd be OK with getting into a fight with the Predator, because he seems like a pretty cool guy, and maybe he'd let you off the hook if you made him laugh.

Dr. Thorpenstein: He comes up to cut your head off with that disc thing, maybe just clown around a little and do a little dance or whatever. He'd probably be like "oh, this guy's no trophy, he's just a normal guy, sort of."

Zackula: The trick with the Predator is you need to get rid of your guns. Guns are a symbol of the power and the Predator, well, he don want nuttin' to do wit ya Babylon, downpresser man.

Dr. Thorpenstein: Yeah, maybe offer him a little grass and put on a Congos album, he'll chill right out.

Zackula: I want to put out there that Predator 2 is way under-appreciated. Think about the possible sequels that could have been made for Predator. They would have been shoddy imitations. At least Predator 2 expanded the Predator reality and thanks to Predator 2 we have all the Aliens vs. Predator mo--wait, where did I start this? I mean FUCK Predator 2. 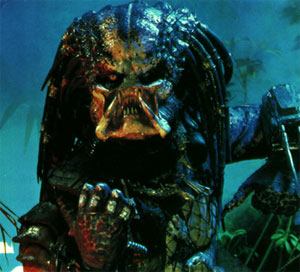 Dr. Thorpenstein: Wait, what? Aliens vs... are you just talking about the Aliens movies? I don't get it. Those are totally unrelated moves.

Dr. Thorpenstein: The Predator is an alien, if that's what you're thinking, but Alien was a completely separate franchise.

Zackula: Alas, like a bellybutton connects us to our mothers, Predator 2 connects Aliens and Predators. It is the Predator bellybutton.

Dr. Thorpenstein: Oh man, think about how cute a baby Predator would be. Awwww.

Zackula: I wonder if they're born wearing a full-body fishnet.

Dr. Thorpenstein: I bet they have adorable little Coolio hair before their dreads get super natty.

Zackula: Predator toys are a lot like human toys but they all have detachable heads and spinal columns.

Zackula: It would seem to go against their code to take trophies from defenseless toys, but they are serious choking hazards so it's considered fair.