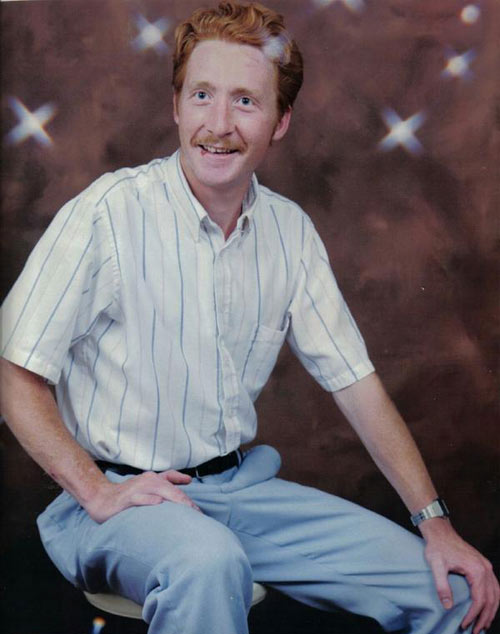 Chuck
Defining Quote: "this is me chuck"

Zack: Chuck is awesome and this photograph does an excellent job of capturing the awesomely magical world Chuck inhabits.

Dr. Thorpe: Chuck is from a better time. Chuck dresses presentably, combs his hair, has his pictures taken on film, and is too much of a man to put makeup on his herpes.

Zack: Do you think twinkling pixies gave him herpes? It was either that or that girl in the shop class he teaches who almost got him fired and faked a pregnancy so he would give her a B.

Dr. Thorpe: You would never hear Chuck complaining that men don't like him because he's "emotionally transgendered."

Zack: Look at that smile. That smile is so genuine I can almost hear a contented sigh coming from Chuck. He's just happy to be Chuck.

Dr. Thorpe: Chuck is a pretty friendly looking guy, but if some jerk got his goat by trampling his Azaleas one too many times, I bet Chuck turns into a wiry little firecracker. Fighting him is like running through a tornado full of barbed wire.

Zack: Maybe he pulls that brick out of his back pocket and brains someone with it.

Dr. Thorpe: He can fight like a cougar, but he's got a gentle soul. His eyes shine with the hope of a better tomorrow. He's got the exact same look on his face that I had in my school picture from Kindergarten, and I think he might have the same backdrop, too.

Zack: I think it would be a good exercise to try to imagine what Chuck might be looking at that has him so happy.

Zack: A dragon flying past a sunset. A friendly dragon too, not a mean one.

Zack: A giant potato and it's bursting open and mashed potatoes are coming out like on an O'Boise's commercial.

Zack: His daughter marrying a robot made out of gold.

Dr. Thorpe: A child righting a flipped tortoise, and the tortoise granting that child three wishes.

Zack: A parade and every person is a famous baseball player and the floats are all made by the guys on Monster Garage.

Dr. Thorpe: The biggest American flag ever made being carried aloft by two soaring eagles.

Dr. Thorpe: A Valtrex commercial that doesn't judge him, but offers hope.

Zack: A car race that everyone wins.

Zack: A black man in a suit thanking a white woman.

Dr. Thorpe: An episode of Mama's Family that he's never seen before.

Dr. Thorpe: A boy scout holding a door open for a baby duck.

Zack: A harpoon being fired through the chest of an emotionally transgendered goth DJ.

Dr. Thorpe: A high school cheerleader fundraising car-wash that manages to remain innocent and non-sexual but is still stimulating within the boundaries of taste.

Dr. Thorpe: An airplane skywriting the lyrics to a Bob Seger song.

Zack: A pickup truck that is driving up a hill of gravel with Jesus behind the wheel and when it gets to the top there is a sonic boom that blows a little kid's hair back and he turns to Chuck and says "it's a hemi!"

Zack: Butterflies emerging by the thousands from a picnic basket.

Dr. Thorpe: Chuck Norris sitting opposite him, smiling back a similar smile.

Zack: There's also that black sidekick Texas Ranger walking up with a tube of cold sore gel. He tips his hat and hands the tube to our Chuck and says "it's okay, we all get them, must be stress" and then he floats up through the ceiling while harps play.

Dr. Thorpe: And then the gigantic 1991 cell phone in his pocket rings, and it's Sherri from shop class telling him the baby isn't his.

Zack: And that's when he realizes that when he dies he he will be at peace and with those he loves for all of eternity in a beautiful place where a man won't be judged for contracting an STD from a Sawzall.

Dr. Thorpe: And he will smile down from heaven on all the fabulous writing achievements of his son, Frolixo.

Zack: Then the Wal*Mart employee takes the picture and reality crashes in on him like storm surge washing over an unsuspecting village. The spell is broken. The twinkles disappear. Chuck is left with only his open sore and a guilty conscience to see him through the day.

Dr. Thorpe: He goes back home and swears that his wife gained five more pounds in the hour and a half he was gone. But he'll never say anything about it, because she's better than nothing.

Zack: That's sort of depressing. I want Chuck to be happy. Let's say the next morning he wakes up and he is King of England like in King Ralph. It could happen. He could blow the hats off the pompous nobility when he decides to use a hot wire to cut foam totally impromptu and against decorum.

Dr. Thorpe: Or maybe someone sees his photograph on the internet and offers him a five-million-dollar deal for inspirational posters. The poster is just this photo, and it says "this is me chuck," and a million office workers look up at it every day and say "we're with you, Chuck."

Zack: In a way we're all him Chuck.

Dr. Thorpe: There's a little bit of I Chuck in all of us.