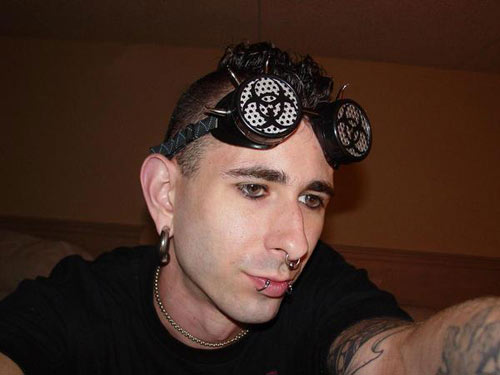 DJ Riddick
Defining Quote: "Who I'd like to meet:
THE MOTHER FUCKER WHO BROKE INTO MY CAR LAST NIGHT (NOVEMBER 26TH) AND STOLE EVERYTHING THAT I SPENT THE LAST 5 YEARS OF MY LIFE WORKING FOR. ALL OF MY FUCKING DJ EQUIPMENT---MY CDJ 800S, MY FUCKING MIXER. MY FUCKING SOUNDSTREAM STEREO SYSTEM WHICH WAS WELL OVER 4000.00... AND MY MOTHER FUCKING GOGGLES.... WHAT SICK ASS BITCH...WOULD STEAL MY FUCKING GOGGLES AFTER YOU CLEAN ME OUT FOR 8000 MOTHER FUCKING DOLLARS YOU STUPID MOTHER FUCKING COCK SUCKING SHIT EATER... I'LL FUCKING KILL YOU IF I EVER FIND OUT WHO YOU ARE. I WILL GUT YOU LIKE A FUCKING FISH AND PISS IN THE OPEN WOUND.. I HAVE MADE MUSIC MY ENTIRE LIFE..AND YOU DIDNT JUST STEAL EQUIPMENT FROM ME... YOU STOLE MY FUCKING PASSION.... YOU SICK TWISTED BITCH. FUCK NASHVILLE... YOUR ALL A BUNCH OF INBREAD HICK KKK MOTHER FUCKERS. FUCK YOU FUCK YOU FUCK YOU. "

Zack: I'm not sure if my figures are completely accurate, but this article is leading me to believe that roughly 50% of the population consider themselves a DJ. Let's hope DJs don't all start voting together or we're going to have DJ Dubbs McScratchspin as president.

Dr. Thorpe: I'd like to commend whoever broke into his car for stealing his goggles. Whatever good Samaritan ripped them off was probably walking by and noticed the goggles sitting on the dude's seat, and said "uh oh, I'd better confiscate those before some idiot puts them on and thinks he looks cool." And then he saw all the DJ equipment and said "Oh my god, this is worse than I thought. He is hurting others, as well."

Zack: At least the goggles pre-warned people that they were facing a possibly contagious case of douche pox.

Dr. Thorpe: Yes, but if this guy were to hook into a PA system, his dorkilepsy could become airborne and infect innocents who happened to unwittingly wander into the club on Rivethead Idiot Night.

Zack: I love it when you open a myspace page and you know exactly what every single person on their friends list is going to look like before you even scroll down.

Dr. Thorpe: Yeah, maybe it's a coincidence, but his friends all look like extras from the campy Broadway production of Beyond Thunderdome.

Zack: I would like to see this guy show up at some Honky Tonk club with sawdust on the floor. Suddenly all of the industrial metal lyrics about "razorblade extinguish acetylene demise" amount to a sissy running from a guy named Mullet with the jagged half of a beer bottle and a little too much JD in him.

Dr. Thorpe: Better yet, I'd like to see him make good on the threats leveled at the guy who stole his gear. That would undoubtedly be a grand display of angry stuttering, unintentional spitting, and a breathtaking finale of "you're not worth fighting, fine, just take the stuff, see if I give a shit."

Zack: It could be any black guy on the planet and he would probably end up apologizing for getting mad. It could be a black midget cripple on an iron lung and he would get tingling race fear up his spine. Like any minute a bunch of Crips covered in keloid scars are going to swoop in on zip lines and beat him to death with bars of solid crack.

Dr. Thorpe: I don't imagine his fear of humanity stops at color boundaries. You don't fluff up your plumage to such a ridiculous degree unless you're incredibly desperate to ward off predators.

Zack: Yeah, maybe he has those seemingly useless goggles to catch all the blood he instinctively squirts out of his eyes when people try to shake his hand. "Nathan, I want you to meet your uncle Frank, he's-" and the guy slams his goggles down and lets out half a pint of crimson through his sinuses.

Dr. Thorpe: Those rings must be to protect him from grandma's kisses. I should point out that this guy does the lighting for Disney on Ice. I don't think I even have to come up with any jokes about that. It stands on its own. Disney on Ice. There it is.

Zack: You know, I don't really "get" piercing. Especially not the ones that seem like that would get in the way of every day life, but they are useful for identifying people who I would never want as a friend. Like if you have an earring with a gauge lower than most shotguns I think it's a reasonable assumption that you and I have absolutely nothing to talk to each other about.

Dr. Thorpe: But since you're such a big Disney on Ice fan, I guess this guy is the exception that proves the rule.

Zack: That's true. I can't get enough of the Black Cauldron realized in skating form. It's how it was meant to be experienced.

Dr. Thorpe: Absolutely. Something about the lighting was a little bit queer, though.

Zack: I wonder if programming an automated light show for Disney on Ice earns this guy credibility at the clubs. "DJ Burn Facet 7 lit the shit out of that children's leukemia telethon last week. Did you see that, man? It was chill as fuck. Especially those swooping red and green spots that formed a Star of David to represent Ibrahim Mordechai Memorial Pediatric Oncology Center and shit."

Dr. Thorpe: "I still watch my bootleg of DJ Faceweld's lightshow at the 1998 May Day Dance at Jefferson Junior High. That shit was so fucking tight, I nearly shit myself the first time I saw how he freestyled the light board over Rednex's 'Cotton Eye Joe,' it was like the song came to life before my eyes and turned into, like, this incredible dragon."