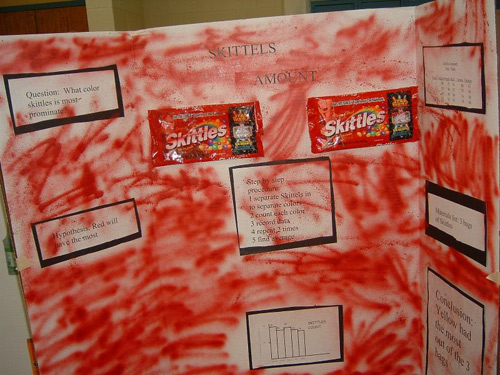 Zack: TSATE THE RAINBWO! I think this poster was created in the midst of a grand mal epileptic seizure.

Zack: I think the most endearing testament to this project's shittiness is the spelling of the title right next to the skittles packages they glued to the posterboard.

Zack: I mean, if you can read the title through the blood smears.

Dr. Thorpe: I think the totally arbitrary hypothesis is the most important part, because it sheds some light on the scientist's motivation: he just really loves red.

Zack: Conclusion: TRAITOR YELLOW COWARD OF THE COLORS AND HATED ENEMY OF THE RED KING WAS VICTORIOUS THROUGH INSCRUTABLE TRICKERY AND SUBTERFUGE!

Dr. Thorpe: I wonder if the kid went into panic mode when he counted them because he already bought all this red paint in a fit of pro-red hubris, so confident was he in his hypothesis.

Zack: Really, it's impressive that his ethics allowed him to conclude yellow was the winner. It's not like anyone would have disputed his claim.

Dr. Thorpe: Maybe red actually DID win but he figured it would look a little fishy so he gave it to yellow instead to allay any potential suspicions.

Zack: Well, at least we know and the great SKITTELS conflict will come to an end. Yellow is the most prominate.

Dr. Thorpe: Red, while definitely the most pleasing to the eye, disappointed us. Hypothesis: workers at the SKITTELS factory cannot resist eating the red ones on the production line, thereby diminishing their numbers.