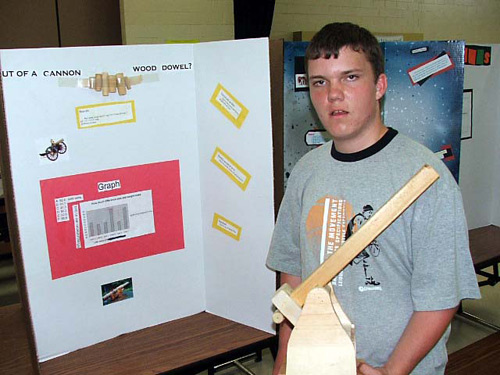 Zack: Wood dowel? Hell yeah! This guy probably just stood in this exact position with this exact expression on his face during all the judge's questions. Maybe once in a while opening his mouth a little bit like he's going to say something or blinking a couple times.

Dr. Thorpe: His thought process beforehand was probably: "How can I work my love of hurting people into a science fair project? Perhaps if I build some sort of a device to shoot bits of wood at them..." That's the translated version, of course, in his head is was more like "heh heh heh... queers... GET 'EM!"

Zack: I have no doubt in my mind that this science project was originally an industrial arts project.

Dr. Thorpe: Yeah, there's one class that this kid isn't an abject failure in, so he has to kind of spread his woodshop success into all his classes. English final: a model of a catapult not unlike one that Shakespeare may have used.

Zack: Math: a ballista that you can shoot at a calculator. Home Ec: Well, he hasn't figured out how to make a battering ram bake a sugar cookie, but he's really close.

Zack: This guy is probably in prison by now for serial arson or assault with a steam-hammer made out of plywood.

Dr. Thorpe: As a side note, I think this kid grew up to be the cave troll from Lord of the Rings.

Zack: I'm sure he tested into that job through the Guidance Counselor. "It's either a Tolkein monster or landscaping. Are you Mexican? Oh, well, I'm sorry then."

Dr. Thorpe: And he just sat there with that exact same look on his face.