These bad tattoos aren't a tribal above an obese girl's butt crack or a blurry bar code on a hipster's wrist. These are tattoos so bad they will make you question this ancient art of using crude drawings to represent childhood sexual abuse and uncontrolled hormonal aggression.

Zack: Everyone has the occasional bad fashion idea. A select few have those bad ideas almost constantly, but only the elite among them take that final step and permanently disfigure their body with their poor judgment.

Dave: It seems like people would do a little basic research before putting a tattoo on their body forever. It seems like they'd check out the artist to make sure there's a basic level of competence, or do a spell-check on their tattoo to avoid looking like a hasty illiterate forever. Then again, it also SEEMS like people wouldn't drown in two-inch puddles of standing water, but that's exactly how Jeff Goldblum died. You just never know.

Zack: I heard the Chinese characters on the back of Jeff Goldblum's neck spell out AMAZING DICKFART. Which is exactly what he wanted. 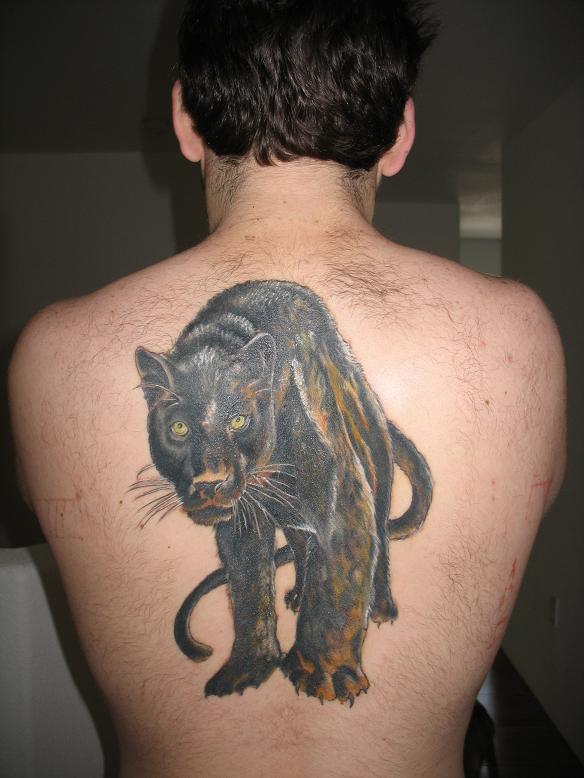 Zack: "Yeah, I'd like a big black panther on my back, just looking out. No, mossier. Make it mossier. No, mossier still. I need it mossier looking, dude. Especially that one giant leg. Are you hearing me?"

Dave: Almost kind of a pleading look on the panther, as if he's asking you to pull the thorn from his paw that's causing his crippling case of acromegaly.

Zack: Ignoring the giant panther - a nearly impossible task - this guy's back is what it looks like on the floor when I move my fridge. Maybe add a cat toy and a couple stray Cheez-Its.

Dave: Maybe he has an outline of a panther tattooed on his back and the rest is just the bits he doesn't shave.

Zack: You know what they say about cats. When they fall they always land on their one giant foot.

Dave: I guess the artist was going for a realistic perspective thing here with the foreshortening and whatnot, but instead he just sentenced this guy to a lifetime of answering "what's with the big leg" queries.

Dave: "No, you see, it's moving its foot toward the observer, making it appear somewhat larg-- oh, fuck it, it's half elephant."