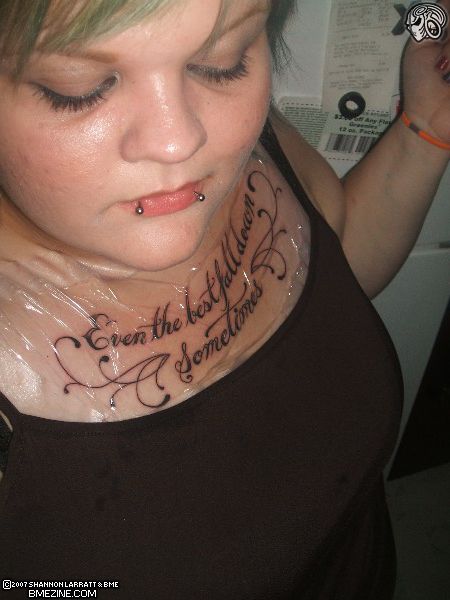 Dave: Nice tattoo, but I'd much rather be looking at a picture of her falling down.

Zack: Can you catch fetal alcohol syndrome from falling down?

Dave: Watch it. Her eyes may be a little far apart, but on the basis of her tattoo I have reason to believe that she may be among the best, and wouldn't you feel like an idiot if you accidentally made fun of a member of humanity's elite upper percentiles?

Zack: I like to play a little bit of a detective with pictures like this. They tell me things about the person. For example, I have deduced that she probably does not speak with an English accent.

Dave: From this image, I surmise that the most uplifting and inspirational things people ever say to her are euphamistic slogans that sound encouraging but are actually just a backhanded way of calling her a big silly failure.

Dave: She's probably got "try, try again" tattooed on shoulderblades and maybe a portrait of the ugly duckling etched into her ass.

Zack: She probably decided to get the tattoo after she was overcome with stage fright on the opening performance of her 100-city tour as a piano soloist.

Zack: "I'm so nervous, but I don't want to disappoint my mother and father who are still happily married, my sister who is not pregnant, and my younger brother who did not asphyxiate in the basement while huffing gold paint."

Dave: Or maybe a single bad dismount cost her the Olympic gymnastic gold. "Ah, but perhaps a tattoo would remind me that I can achieve my dreams in the next round, especially since my stepfather did not touch me inappropriately."

Dave: Do you think her grandma got tired of covering every chair in the house with plastic sheeting to prevent this girl's various drippings and trails and sebacious oozings from getting all over the upholstery, so she decided to just put the saran wrap on the source of the problem?

Zack: A little high. Grandma needs to aim for where the preemies keep falling out.