"We've touted the miracles of gaming technology that accompanied the release of our T-buffer enabled cards, and the V5 6500 is taking all of this one step further," remarked company spokesperson Brian Burke. "Heck, this is at least 10 steps further."

While no hard details were released about this card, reporters were given the following facts:

The V5 6500 will not settle for "movie-like" effects, but it will rather make movies while you use it. Expect to see new and exciting films produced every time you play Unreal Tournament!

"300x anti-aliasing" will be accomplished by shipping every card with a big roll of industrial Saran Wrap, which should be wound over your monitor until everything is just a huge blurry mess.

The card will ship with 1 gig of ram, expandable to 2 gigs via SLI connection. Be warned though, the cable which connects the two cards will be big enough to fit a child into.

V5 6500 card will require an additional outside power source, since the card requires 2000 watts of electricity.

In Q3A benchmarks, it will outperform the GeForce 2 by at least 19 FPS.

Little else is known of the card, but we were able to "borrow" a demo unit and snap a picture before 3DFX officials confiscated the card and our camera. Look for more information in the future. 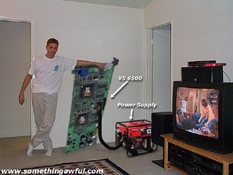