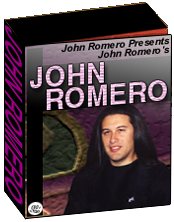 DALLAS, TX - Following the release of ION Storm's much hyped "Daikatana", the Texas-based game designer John Romero has shocked the world by announcing his next project.

"I've successfully revolutionized the entire FPS genre by designing 'Daikatana', a game that will undoubtedly become a classic title to gamers across the world," Romero explained at a recent press conference. "Since I feel I have already achieved perfection with this work of art, I do not think there is any room left in the FPS field for another title by me. With this in mind, I am concentrating my efforts on a different type of game, one that is not limited to the confining FPS genre. I am now spearheading the development of 'John Romero Presents John Romero's "John Romero"', a game which will cross all borders and redefine the entire concept of gaming."

Industry officials at Eidos seemed to be ill-prepared for Romero's announcement, and many appeared to be caught off guard by the surprising revelation.

"Uh, John's a, uh, pioneer in the gaming field so we, um, feel that this decision of his is a, uh, great one for the gamers and everybody who, uh, likes entertainment and things," stammered Brian Kemp, public relations manager at Eidos, while packing a travel suitcase full of money and clothing. "We have total faith in his judgment and think that, um, whatever he just announced is just a great idea. Have you seen any one-way plane tickets around here marked for Tahiti?"

As previously suggested, Romero didn't go into much detail regarding this new title, merely offering what he dubbed "a brief overview."

"This will be an incredible game, the kind of game that I want to play. We at ION Storm simply like making games that we find to be a blast. This game is going to redefine the industry as we know it, because it will cross so many lines and boundaries. It'll be so totally cool."

"YES!" exclaimed Romero, leaping from the podium. "It will be all those and so much more! Just like the mega wonderhit 'Daikatana' was influenced by different time periods, this game too will be influenced by many different types of games! Check this out:

Mission one: control a virtual John Romero around a million-dollar mansion! You get to make decisions regarding what he eats, wears, and how he interacts with his surroundings. Depending on the choices you make, your virtual John Romero will either become happy, sad, angry, or a variety of other emotions! Totally realistic! 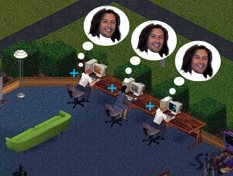 It's a Romero LAN party, instantly bringing these peoples' happiness levels to the max!

Mission two: it's dancing time! Since everybody loves those crazy Japanese dancing games, we'll have a part where you get to dance too, but with a twist! Instead of trying to dance to the rhythm, you'll be keeping the beat and watching your employees attempt to dance to it! Be careful not to speed it up too quickly or suddenly stop, as the employees will quit and form new companies. 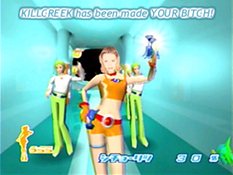 Dance to the beat, employees of ION Storm!

Mission three: cruise around in a minecar, trying to snap pictures of famous gaming celebrities as they hide behind bushes, rocks, and other forms of natural landscape. Points will be awarded based on how centered the picture of the celebrities are, what company they work for, and their popularity. For once in their lives kids will be rushing out to actually take pictures of Jason Hall, instead of fleeing from him as fast as they can, shrieking and crying!"

Public reaction has been lukewarm at best, with the most vocal criticism coming from the Shugashack's message board.

"I guess it can't be any worse than 'Dominion'," wrote Alex Ramsey, Editor for the online site Gamers' Game Revolution of Gaming Games. "Can it?"