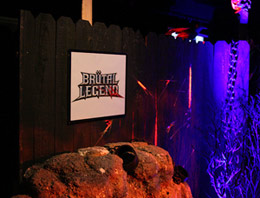 The EA marketing team assembled a set that would make any high school musical production proud!EA almost tricked me. I went to the Onyx Bar for an interview with Tim Schafer, creator of Brutal Legend and found nothing but Wii games on display. I spent the better part of an hour waggling remotes and trying to find polite ways to talk about the horrible Wii graphics while I waited for Tim to show up. They informed me he was delayed at the airport and pointed me over to the open bar. A couple of drinks later and I found the new Nerf Blast game to be a lot of fun and learned a lot more about My Sims then I ever hoped to. I eventually made my way past the bar and found a set of stairs that led into the underground section of the bar.

This part of the bar offered up some real games, not a Wii in sight. I checked out the new GI Joe game, played some Left 4 Dead 2, quickly walked past some fantasy game about elves and dragons and ended up in the dungeon that was Brutal Legend.

Brutal Legend captures that unmistakable feeling of metal and brings the idea of dragons, leather, magic and music together better then Man-o-War ever could. The great thing about metal is it's the gayest thing in the world with all those hairy half naked men in studded leather harnesses singing about elves and putting their balls to the wall should be reserved for gay fetish sites but because it's so over the top and honest, it just works. Brutal Legend is not mocking metal, it just wants to fucking rock! 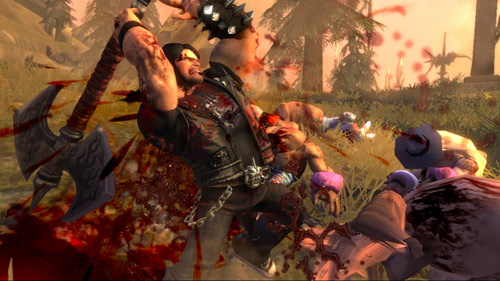 With the set adorned in chains, axes, skulls and enough metal studs to stock a Hot Topic, we sat down with Tim Schafer to talk about his new game, his old games and learn the origins of the Rubber Chicken joke.

AxeManiac: We had some questions, a few from the Something Awful Forums...

Tim Schafer: Really? They do hilarious stuff there. Something Awful always includes us in their crazy art round ups. They did the... did they start the fancy versions of the covers (to video games)?

Axe: Yeah. They did, they redid the covers to look like that modern style.

Tim: Like books you are forced to read in High School. That was awesome, cyclops was in there, that was nice!

Axe: They do great stuff, and we had a quick couple of questions for you. Brutal Legend has been in the works for a long time, the game was originally planned to be a full out multiplayer title and has seen some major improvements and changes as it has grown. Originally it was reported that Ronnie James Dio was going to play a role in it. What happened to Dio?

Tim: Dio is awesome and he was definitely someone we definitely, really wanted to have in the game and it would have been great. All I can say is music licensing is more complicated then I ever could have imagined and there are so many other things involved. It's not just a matter of& it's just very, very complicated.

Axe: So it's clear to say it wasn't by choice?

Tim: Given the option I would have had Dio, he's awesome. 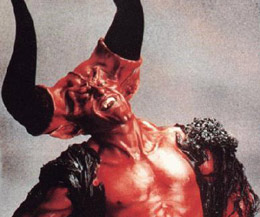 EA's CEO.Axe: But Tim Curry is taking his place, right?

Tim: Yeah, for that character, some of it was my mistake, I cast him. I wanted him to play a bad guy, Doviculus, the emperor of the demons. Dio has such a powerful voice, that I always thought of him as being booming and powerful, but he's not. As soon as he got there, I was talking about how low this guy's voice had to be and he was like, "You know I'm not a bass. I don't do that."

Anyway, Tim Curry did this part in the movie Legend, the old Ridley Scott movie, Lord of Darkness, and that character is so perfect for what we are looking for. That way he also has this really deep voice and he's also evil, but also a little, umm... kinky. He's this kind of S&M demon, like when you hit him with your axe, like half of the time he is kind of like "oh oww oww!" (in pain) or half the time he is like "ohhh.... he likes it. So it's kind of a perfect role for Tim Curry and he was so much fun to work with.