Here's the situation: no matter what you may have heard from the lamestream media, Republican Presidential candidate and Godfather's Pizza CEO Herman Cain is forging ahead. The unflappable Cain has demonstrated his cool under fire (pizza, sexual) again and again, proving that he has the composure demanded of a Commander in Chief. To further prove his strategic bona fides Cain has released a map and a paper describing Cain's take on America's relationship with various countries around the world. It's an illuminating look at Cain's unique worldview. 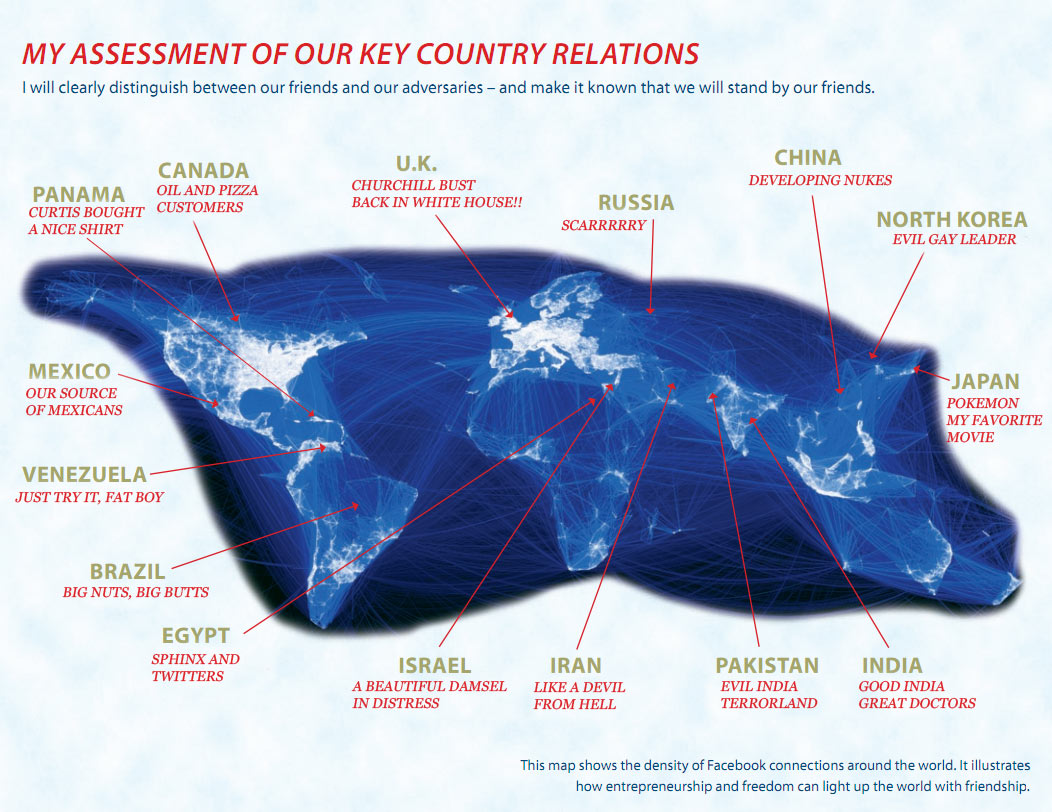 This is the place to be. The most important continent where it all happens.

This place is just below our place. It's where all the illegal Mexicans come from who make all our groceries and pick all the sweet plum tomatoes and tangy Vidalia onions we use in Godfather's Original Recipe pizza sauce. I went there once and it was nice. There was a beach and you could eat the fish they caught right there on the beach. I ate a turtle I think. It was really really really good. A LOT of prostitutes.

Canada is our friend to the North. We have been friends for a long time and we are good friends. I flew there in a plane once and it looked just like America but it was colder. All of the people looked the same as us - mostly white people but some black people and Chinese people. I liked Canada. My favorite place to go was Mr. Sub for a sub sandwich. I wanted to go to a Tim Hornton's donut shop but all they had by my hotel was a Dunkin Donuts. It was good. Then I left. LOTS of strippers that are super dirty.

USA stands for United States of America. It is the biggest and most powerful country in the world. If you are using a computer it probably came from an American company. Do you like hamburgers? How about pizza? Thank the USA. In my country we just call it America and we call ourselves Americans. It's fun. Anyone can be an American as long as they get in line at the border. There are a lot of good states. The only bad state is Illinois because that is where Obama is from. Chicago THUGS. It's the Chicago way. Rezko.

These wimps wouldn't dare. That Hugo guy talks a lot but what do they have for an army? Ours is much bigger. There's no way they would try anything. I hope they do. I hope they really try something. Then we'll see how tough they are.

My nephew Curtis bought a shirt at Panama. Or maybe it was a hat and he got the shirt at the other store. I didn't like it very much. I remember when he brought it home I told him he should take it back and get a cowboy shirt with turquoise buttons. Yes, a black man can line dance. I like to dance and dress like a cowboy. I would hire a Panama cowboy to teach me how to use a lasso and then if congress couldn't get along I would lasso them all up until they worked it out. Wonder woman had a lasso. You could see her big ol' pussy through her suit.