Most of our friends are in Europe, but some enemies too. A lot of developments here. The most important part of the world.

Next to maybe Canada these are our best friends. Pretty funny when you think about it because we had to beat them in a war to be Americans. Otherwise we would all be speaking British. I know it's English but it sounds different than American. So that's what all of us would sound like. The first thing I would do would be to get back the bust of Churchill Obama gave back to the king. It's rude to give back a gift. I think Churchill was a good guy. I read a book about him once. He helped the British colonize Africa and if it weren't for them colonizing Africa I would be speaking African right now which ISN'T English.

These guys are friends of America. We have a base for our airplanes there. They seem friendly, but did you know that these are the bad guys from Kelly's Heroes? Remember the guys in the big tank that they shoot with the paint? Those were Germans! They were our enemies for a while, which is all over now but you have to learn a lesson from history or you'll have to do it over again. These guys are our friends? I guess. It's like that old saying: even if your pizza is bad it is still a pizza.

Definitely bad guys! They have a lot of nuclear bombs ready to drop on USA and our friends. I remember growing up and these guys were our enemies. When the Russian Olympic team came to Atlanta I had our store send over free pizzas but first they put floor hairs and dirt and bandaids on them. Every time America tries to do something in the UN these guys are hanging around with their butt buddies the Chinese saying no way. They also sell all the jets and tanks and stuff to the people we don't like. What are they up to? I'll find out as President and I'll break it up.

A lot of stuff is going on here right now. Obama doesn't know what he's doing. This is the most important place.

Nobody knows what's going on here. Not even experts who know everything about the world. It's crazy. The President is dead with a broom up his butt. He was shot on a video. Bring our troops home.

Seems like a nice place. A lot of desert. They have a real Sphinx. I would like to visit them, but they have too much twitter. Punk kids camping in the street. Occupy Pyramids? Show some respect. This is an old country.

These guys are America's best friends. They are the only free country in the Middle East. They are welcome in America all the time. They help keep Palestinian terrorists from attacking America. I like Israel.

Ohhhhh dang it. You know what, I looked at this one just five minutes before I sat down to write this. I got Libya, right? Okay, President Obama's Yemen policy, I disagree with because, whew, is this the place with the chocolate waterfall? No, that's not right. Man. I can see it in my head, but, ah. Dang. Ahhhhhhh! 9-9-9!

A strange and fantastical place. Obama has ignored it, but this is the most important region of the world. 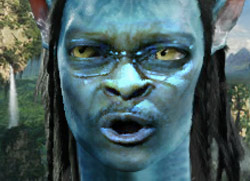 I was rooting for China the whole way. With their natural resources I knew that business and job creators could get a good deal there but I didn't know that it would be located right beneath their Hometree. They are much bigger than us, about the same size as my wife, which can be intimidating, but when you realize that they are as human as you or I it makes you feel sorry for them. I would like to get a pizza for them and take it to their tree. I would give pizzas to everyone and I would say "teach me your ways and to ride your dragons" and then I would find the prettiest of them and slowly force her head down towards my crotch.

All around the world there is trouble. President Obama has left our nation in disarray. We are in some real trouble. I haven't seen his birth certificate either. There are some valid questions about that. I will stop apologizing to our enemies. I will secure our borders. I will find all of the terrorists out to get America. To quote a favorite poem of mine, "I wanna be the very best, like no one ever was! To catch them is my real test, to train them is my real cause!" Get on the Cain Train!