Tuesday, Aug 22, 2000 by Ben "Greasnin" Platt
Greetings dear viewers. As you are no doubt already aware of, my name is Doctor Fred Malalavich, one of the most esteemed professors and scientific experts in the field of psychological study. I have conducted thousands of experiments over the years, many of which were legal. I have published countless invaluable tomes of knowledge describing my revolutionary scientific analysis including, "So You Think Your Kid is Dumb", "Your Wife is Probably Cheating on You", and "Why Must You Use Such Stupid, Stupid Words?" Simply put, I am not only the best and brightest star in the psychology field, but I eclipse everybody in EVERY field, both real and imaginary. I have been contacted by Mr. Rich "Lowtax" Kyanka to conduct various in-depth scientific studies on citizens of the Internet, so we may hopefully learn more about the fascinating creatures who make up our on-line culture. The following analysis is intended to be read as fact, just like each and every statement I make, concretely based in scientific reason. 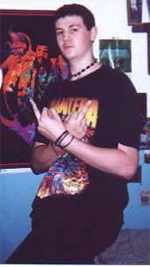 "SNAFU", an online "rapcore / deathmetal" band composed of five white males. While the topic of white children who rap is interesting enough to warrant attention and a thorough investigation, the webpages such bands create makes a rich topic even more fascinating. They are the online equivalent of a fiery car accident. "SNAFU's" webpage may be viewed at http://www.smdnet.com/ctm/snafu/, although I am not quite sure why anybody would voluntarily choose to visit it.

As a wise philosopher once said, "you never get a second chance to make a first impression." Now that I think about it, I believe this is actually a quotation from a deodorant commercial and not a phrase muttered by a wise philosopher, unless you consider a man with sweaty armpits to be particularly wise. In any regards, the first impression one is inundated with often makes the most powerful impact in their mind. That said, it is a safe wager to claim that the majority of people who have visited "SNAFU's" site believes they are a nonprofit organization dedicated to the advancement of mentally-disabled child entertainers.

Let us examine the color scheme of this site, which is limited to red and black. As you are probably well aware of, red and black are two of the most basic primary colors, suggesting that the members of "SNAFU" do not desire to stand out from the rest of the world. They see themselves as "just another group of people", much like the three people who spend all day hanging around the bus stop, talking to the ashtray. Upon a deeper examination of the colors red and black, an astute observer will notice that the combination of these two words can form the "rack" and "bled". The link between pain and female breasts is just one of many anti-heterosexual / pro-homosexual undertones this website promotes.

The black background of every page suggests an obsession with anything dark or dangerous. The bright red text on the aforementioned background reveals a certain feeling of inadequacy, a belief that they must use bright, contrasting letters to make their presence know. This is confirmed by the idiotic "dancing" animated gif letters of the left menu bar which seem to spastically convulse when the user hovers their mouse pointer over them. It is a desperate cry for attention, much like the time when they were children and tried to see how many Erector Set pieces they could shove into each others' various orifices. I firmly believe that the members of "SNAFU" are simply tiny little children at heart, crying for society to give them the attention they feel they deserve. In time, they will learn to accept the loving, tender embrace of a 300-pound biker named "Big Eddie" in the prison cell next to theirs as the attention they're vying for. However, until the band members are actually caught and arrested for attempting to solicit livestock, they must settle for this desperate cry for attention, an awful webpage which ranks their combined intelligence somewhere below a tub of coleslaw.

While the color scheme of this site certainly reveals much, it is the accompanying text which speaks volumes. The overall impression that these youths-gone-wrong want to give is one of toughness, a feeling that any "punk" stupid enough to "step" to their "mad skills" will get "hit" in the "face" "with" a package full of "Hillshire Farms Little Smokies." The apparent capitalization of random letters suggests the members of "SNAFU" have an inferiority complex, one which they attempt to disguise by making all their sentences appear as if they were written by head injury victims suffering a Ritalen withdrawal. Let us examine these text examples: