The pizza business I own with two other people has been doing very poorly for the last year. We want to disband our partnership within the month and close up shop. All the partners are still on good terms, but the business has some outstanding debts and the creditors are demanding immediate payment. What are our options for declaring bankruptcy? 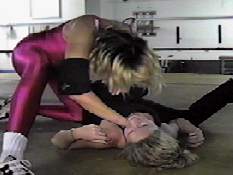 However, even though the partnership can file for bankruptcy, it might not solve your problems. I would recommend filing under the little-known Chapter 97, also known as the "Hey I'm a Dummy and I Can't Even Run A Crappy Pizza Place" bankruptcy clause. It's for dummies like yourself who, either due to gross mental incompetence or the inability to carry a single thought through their horribly damaged network of misfiring cranial neurons, have dug their way into debt. Under this rule, you may shut down your failed little pizza joint and sell it to the government in exchange for instant debt relief. The government, in order to generate money to pay off your bills, will turn your restaurant into one of the two following ideas which are sure to make money:

1) A Starbucks coffee house. You will have to work outside, asking for spare change in order to help provide extra revenue. You should wear a bunch of ratty clothes and a sign that says "VIETNAME VETRAN! PLES HELP ME CAUSE MY WIFE IS DEAD AND MAYBE MY KIDS ARE TO AND I JUST WANT A CUP OF COFEE AND A BAGGEL." Feel free to have animated conversations with various inanimate objects, although it probably won't help you earn any more money.
2) A "Make Your Own Pottery" place. I don't know how the hell these places stay in business, but there's one on every block, so somebody must like making God-awful ceramic dishes. Throw some Pokemon crap all over and voila, instant hit. Have you seen those new Pokemon? One of them is like a big ladybug and I think it's name is something along the lines of "Ladybugga". It reminds me of the stuff I saw after I drank the puddle of coffee I found in the bus stop's ashtray.

I forgot what the heck was talking about. Oh yeah, one time I sued a water park for a client who had lost her bathing suit while going down one of their waterslides. The unique thing about this case was that when she got to the end of the waterslide and noticed her bathsuit was gone, she realized SHE HAD A PENIS! There was no warning of potential gender changes in the amusement park anywhere! We settled out of court for 20 feet of pneumatic tubing and a six-pack of Molson Lite.

I’m a general contractor who specializes in building home additions. I have a client who is enjoying her new addition but refuses to pay per our contract. Over the past six months, I’ve tried asking my client for payment, but I’ve been put off each time. How do I put a lien on my client’s house?

This is indeed a very tricky situation. As a contractor, you have a right to place a lien on the property you have furnished with labor and materials. However, based on the information you provided, I am afraid that it is probably too late for you to file a lien notice in this case. The law requires that a notice of lien be filed no later than 90 days after you have ceased to furnish labor, professional services, materials or equipment to the project. Since you said that you have been trying to get paid for six months, I assume that time period has expired.

I had a client with a problem just like yours. She was not able to put a lien on her client's house because she forgot to ask for payment until 47 years later. By that point, the client had died and her spoiled kids had moved into the home. I instructed my client, who I shall call "Mrs. Cathy Johnson" to keep anybody from knowing her real name is Karen Monroe, to hide a bunch of tape recorders inside the house. Every night, at exactly midnight, she would make the tape recorders start playing ghost sounds and the following message:

"Whoooo, this is your dead mother! Whoooo! I never liked any of you stupid kids. You're all failures. I will haunt you until the day you die. Whooooo!"

I also advised her to spike the water with LSD so the illusion would be compete. Soon enough, all those stupid kids were freaked out and afraid to set foot in the house. Now you may be asking how "Mrs. Cathy Johnson" was able to collect any of the money owed to her thanks to this. Simple: we kidnapped her kids and sold them in the white slave trade! I find that the "Ghost and White Slave Trade" tactic works in about 98% of lien cases. The other 2% can be solved by applying a generous amount of rubber cement and letting it sit in a cool room overnight. One time I was using the restroom at the Sizzler and I thought Hitler was in the stall next to me! I zipped up my pants and opened his stall door, but it wasn't Hitler. It was Mussolini. Then we conquered Poland. That happened last August.

Well, that's all the time I have for today. If you want, you may email me at your convenience. I will answer any legal questions you have, assuming my fingers don't suddenly grow to the size of telephone poles, keeping me from being able to type coherently. Hey, it could happen, I've been getting a LOT of chalk in my diet lately.