Please view our updated Terms of Use before adding anything ALF related. 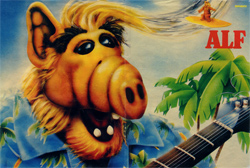 Hundreds of ALF-related books have been produced, including this book of guitar tabs for ALF: Paradise Cruise.ALF-based fiction predates the premiere of the ALF CBS TV-series. In 1985 Alan Dean Foster ghostwrote a novelization of ALF entitled "Where Fate Will Take Us" which focused heavily on ALF's self-destructive eating and depression, as well as a side-plot involving a race of plant aliens that was cut from the pilot of the show.

The most widely-read ALF fiction is The Reaper Point series of Admiral Stahl books by R. A. Salvatore, in which a disgraced Melmacian despot enlists a rogue biolord to construct a droid fleet and restore his honor. The venerable Cat Hunter series is also much-loved by fans. It is currently on Book 26, Tabby Rising.

Other notable ALF books include Michael A. Stackpole's Rogue Vector pentalogy, Willie's Lament, The Shumway Paradox and the Hugo-winning TANNER, which casts ALF matriarch Kate Tanner as an astronaut crash-landed on Melmac.