Fox on Sex: Refresh Your Love Life with Adventurous Venues

Fox on Sex columnist Jenny Block will be off having her labia dynamited by professional implosion technicians. In her place we welcome guest columnist and Fox & Friends host Brian Kilmeade. Due to short notice Mr. Kilemeade will be covering the topics originally planned by Jenny Block.

Fox on Sex: Do Sex in Weird Places: for Better Sex 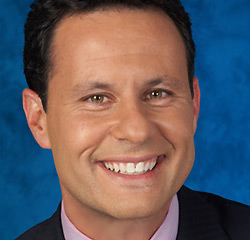 I'm Brian Kilmeade host of Fox & Friends. Fox asked me to write this article because I have had sex a lot of times. Over 250, easy. I do a lot of exercises especially on my arms and I have a solid core and upper body. Good definition on all the ceps. Strength is important to three things: fighting (crime + corruption), lifting things, and doing it.

Back in the 1990s I was a skinny wimp with no upper body strength, could bench maybe 120. These days when I do my wife I can exert 950 foot pounds plus of horizontal dick energy on steady up and down g-forces to her clittoral region. This averages 7-10 orgasms per clit-crunch boning session.

But even a sexual dynamo like me sometimes feels like things are getting boring. We've done the batman thing to death. I'm batman trying to stop her and she's Talia Al Ghul standing in for Ra's Al Ghul on the runaway train carrying the water vaporizer to drive the entire Gotham sector crazy with lust. To be honest I let her win sometimes, she never beats me on her own. This is good to extend your excitement maybe ten times. Fifteen tops if you're really solid with the impression plus get to know the character, study the background, and train in some moves. I've got Bruce Wayne's down and my wife is pretty good with Talia, although she refused to call the tackling dummy I hand-painted Father.

Once the steam runs out of that kettle I say move on to something else. I was told this article was supposed to be about doing it outdoors and what have you, so that is my advice. Go outside and do it.

They gave me these "sexy" pictures to use, but I don't get it. Broad looks about as stacked as a marble pile and dude has the pecs of a chubby baby.Let me put it this way, breakfast in bed is good, but every time I do it I half choke myself eating pancakes laying down. Shouldn't eat carbs supine. I think the reason is that as cavemen we had to eat standing up all the time in case we got attacked by devils. Solid advice I heard from a carb guru that came on the show. Forget his name, but he was a doctor so there you go. Point is, beds get old.

Sex is good in bed but if you want to do it better go somewhere else. Start with the kitchen or the bathroom. Usually you eat and dump in these places so its weird to do it in them. Sort of exciting and different, like open faced sandwiches.

Try doing it in the cellar and pretend you're in a buffalo bill dungeon with all those weird jars and the boxes of books bill o'reilly gave you. Do it on the swing set you built for kids but trust me you have got to wipe it down with some of that purell stuff afterward or your kids might get the bad hepatitis riding the swing.

It won't take you long to try out everywhere in your house so then you need to go elsewhere. Doing it in trees and on park benches and stuff is okay for a while, but there are a lot of cons to outdoors sex. Main con: ants. Cannot stress this enough, check for ants. Another big con: old ladies. You would think they would stay indoors, but old ladies are everywhere when you take the day off to do your wife triple hard in the bushes next to the pond. And if they find you they will stand there and watch and not even look away, I guess because what else are they going to do? It's die eating pudding, Matlock reruns or watch Brian Beef and his 230 pounds of ripply raunch hammer nails into the tail end of 1994 Miss Rhode Island and former backup Colts Cheerleader AKA my hot as hell wife. 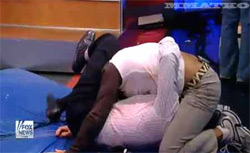 Only reason BJ Penn took me down on Fox & Friends was I had the wrong underwear on that day and I need more free movement.Face it: that's only going to rule a couple times. If you can get backstage at UFC you can get your honey in a singlet and submit her in the octagon until you hear that ass pop and automatic tapout, or throw in the towel all over her head, if you know what I mean. That's solid, but I know only about two or three hundred people can get backstage at UFC.

Some other good outings for doing it outdoors or whatever are:

Good for Ra's Al Ghul vs. Batman sex. Take capers to a whole new level and it really adds tension if you know a bunch of black guys are going to get on at the next stop so you have to hurry up and pound wifey rodeo raw before the sex stink drives those jungle animals into a sexual frenzy.

Once again, don't know why they gave me these pictures. Looks like some guy with cancer is about to hook up with some suspiciously ethnic broad who might be a 6 out of 10 with a couple 800cc chest floaters popped in there.Cars

Pros: cars are fun to drive plus lots of fantasies about cars. Cons: cops will tear up the ticket when they recognize me from Fox & Friends but sometimes might catch a glimpse of my nude body and be so impressed they write a blog post about it on cop blogs.

This is good because you can go out in isolation but trust me that fire is not something to mess around with on a boat. Rented a 50 foot scuba yacht and had a 20 pack of votives floating in the moon pool we use for the Sea Doo dive scooters along with the whole place lined with those creepy glass tube candles chicanos love.

Picked out all virgin maries and pretended it was a Madonna video, but somehow the moonpool got sheened from doing donuts with the sea doo when I was drunk (way earlier) and ended up starting a fire in the moonpool. Had to call the coast guard but because it was technically under the boat/inside the boat all they could do was bring us over and put blankets on us while we waited for the fire to go out, which took like hours and ruined a whole day of yacht rental. 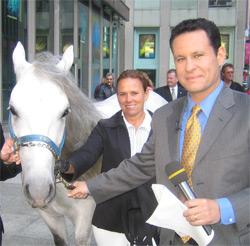 Here's me being polite to a Jihadi wife. Just kidding, it's a horse, but it's an Arabian horse. Coincidence? You decide.Got this one planned. Jihad jeronimo decided to erect a mosque on ground zero to insult the decadent west, well bad news Al Sama: I'm gonna download the floor plans off the NY Post website, sneak into your chamber where you keep the evil cube, and desecrate the hell out of it just like you did to ground zero. I've got ten terrible inches and I'm ready to haraam it up wifey's Brazilianed baby pit and fling our sex mess everywhere. I'm talking on a solid half-galloon of crud on every surface, so good luck getting into Jihadi Heaven.

Got these weird tunnels and burrows all over my property, too big for a ground hog so I don't know what is making them. They're just about big enough for two people to lay on top of each other in, so what I'm going to do is widen them out a little bit, get some glow sticks and shimmy down there and see what pops up. I'm guessing it's going to be 10-15 deep vaginal orgasms caused by the constant pressure the curvature of the driller puts on the g-spot. Going to need to work out specific muscle groups and double down on the zumba tapes to pull this one off, but I am pro so it will be worth it.

Short of being able to dead lift an engine block and having the sexual fairings of an SR-71 fuckbird and a solid ideological foundation I got nothing else to say to you. Take it on the road, pound it until it starts screaming, and only let it out when you're around.