Persepolis movie: Inappropriate "Rocky" music Want to see an Iranian girl sing the song "Eye of the Tiger" in a French accent? Then this is the movie for you! Its also supposed to be the touching story of blah blah blah, EYE OF THE TIGER!

the All New Industry Rumor and Spoilers thread. That means SPOILERS inside The spoiler? Jim Shooter could be taking over as EiC of DC comics! Do you care? NOOOOOOOOOOO!

Crew member killed on set of Batman: DKR It's a tragedy thats for sure but that doesn't stop BSS from deciding that if he didn't actually die he would have become the bitchinist truck related villain ever.

Funny Panel of the Week
thanks Deadcell27 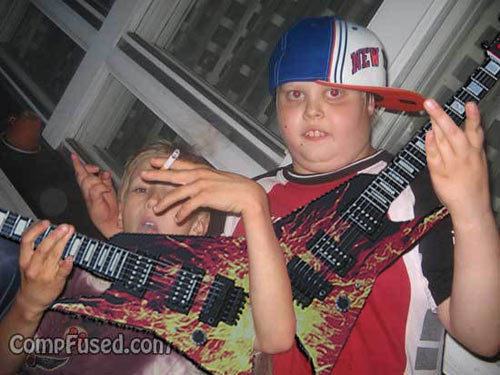 Creepy repressed Oedipal arsonist on my campus - Rather, I dare say I was most affronted by the officer's rather aggregious reaction to my admittedly rather stupid idea of setting things ablaze in my dorm room. Rather, I was so shocked I affected an English accent most ratherly.

Rock and roll! - I always wondered what prominent historical figures and famous photographs would look like if they had guitars. Now all I have left is dreams of what they'd look like holding Guitar Hero controllers.

Cry havoc! and let slip the dogs of war. - You idiot, don't loan these important historical documents to a museum. Do you know how much the History Channel will pay for new stock footage that's not about Hitler or WW2?

Lets talk about weird fucked up people who approach you - So some old lady came up to us and tried to initiate a conversation, but I was like, fuck that, we're here to ride, not to make friends.


Sexual Innuendo in Disney's Alice in Wonderland [img heavy] - Let's remember, Lewis Carroll was a pedophile and not an ephebophile.