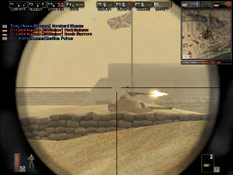 Looks like I might be able to line the shot up, but think again! With more than twelve or so people on at a time even high end dedicated servers get choppy and small arms get nearly worthless thanks to the game's "MAGICAL NETCOAD"Since Battlefield 1942 can be played online you can expect some "great times" to be had on public servers. No matter how good you are, how skilled and heroic you are, if you are playing on a fairly populated server and your team is composed mostly of idiots, you're doomed. Defeating your opponent relies on teamwork and coordination, more so than any First Person Shooter I have played online to date. On public servers you'll find people whose behavior would make the computer AI blush with sympathy. I've seen jackasses who try to drive planes across the ground or indiscriminately bomb your own team, destroying unoccupied vehicles when friendly fire is off, butchering your team when friendly fire is on. Usually it's not even anything spectacular, it's just the disorganized randomness of people each running off to do their own thing that costs your team the win. I can assume some of that owes to the newness of the game, and I hope that in the future people start to work together a little better.

The real disappointment comes not from the players or the game itself, but from the way the online multiplayer system works. Most games last about eight minutes or so per map, although they can last much longer if the teams are evenly matched. Most public servers have each map set to play once. Now on my system, not a high-end system by any means but certainly adequate, it takes between two and three minutes to load a map. Alright, that's fine, I can live with that. What I can't live with is the fact that it displays a "loading" screen for roughly a minute at the end of the game, then logs you out of the server and automatically reconnects, taking another minute or so, and THEN it begins to load the next map. If you're doing your math that means on your average server you can expect to spend over a third of your time loading maps. Word on the street, I'm not sure what street exactly, is that this is a byproduct of their copy protection process.

Hey EA/DICE: find a new fucking copy protection process. This coupled with the introductory logo videos that you can't skip makes it take fucking ten minutes before I'm playing a game online. This is part of the reason "cracks" proliferate so much, people look online for a solution to actually be able to play the game instead of load the game, take a nap, and then play it. What makes it extra super duper awesome is that somehow in between the demo and final release they introduced client side instability that causes the game to disconnect randomly every hour or two. An annoyance in a normal game, but in a game with as much down time spent waiting as this getting disconnected thirty-seconds into a map makes me want to kick my computer out a window. Keep in mind the servers I was playing on were the exact same servers I was playing the demo on.

After all that gloom and doom about Battlefield 1942, it pleases me to say that the game can be absolutely wonderful if everything falls into place. It helps to have a private server or two, and the SA Forums are a great way to get in on the game with people you know somewhat. I play almost exclusively on servers run by our forum members and people tend to cooperate effectively much more often. 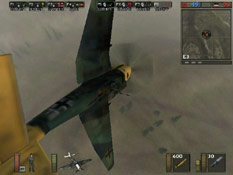 Flying is extremely fun, but I can't hit anything, I'm horrible at it. This plane in the hands of a computer pilot would have already turned Kharkov here into a virtual Hiroshima.

Some of the most fun I've had playing with the SA goons has been completely unrelated to the actual objectives of the game. Arranged dog fighting, jeep races, seeing how many people we can get laying on the wings of the bomber, and many other wacky events have demonstrated the incredible, if somewhat unrealized, potential of Battlefield 1942. I have laughed at things that have happened in this game until I had tears in my eyes.

One time on a server with five or so other SA Forum people we decided to have a jeep race. I climbed onto the hood of a jeep and laid down, enjoying the view as my chauffeur and another jeep driver journeyed to a point where a third jeep could be found. I climbed into the third jeep and the other two lined up as I began parading back and forth "headbanging". In Battlefield 1942 when you're driving the jeep if you whip your perspective up and down quickly it appears to others that your jeep driver is rocking out hardcore. On about my third pass they were getting antsy and telling me to get in line. Abruptly a plane dove down from the sky and crashed directly into my jeep, killing myself and the plane's pilot. We respawned at the same airport where the huge heavy bomber was located. He climbed into the pilot's seat and I climbed into the ball turret slung underneath the fuselage. Just as we were about to take off, the two racing jeeps came screaming around the corner of the hangar and collided one after the other directly into the ball turret. Both drivers were killed instantly and I nearly passed out from laughing so hard.

In a game where I can have that much fun doing whatever I want I find the flaws to be all the more disturbing. Digital Illusions have created a game with the potential to be one of the best titles I've ever played, but because of their questionable development decisions (copy protection annoyances) and technical problems (horrible AI and instability) the game is nothing more than an entertaining diversion.

I hope that these issues can be addressed in a patch, but I cannot stress enough how unlikely this is with EA behind the project. They are one of the most notoriously apathetic producers of software out there and I hope they burn in a hot pit of hate.