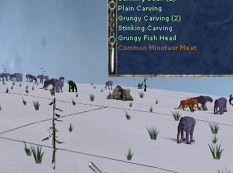 The great herds of lazy monsters stand around the tundra that's right next to the forest waiting for me to wander into their zone.During my first adventure into the wilds surrounding the starting town I was immediately impressed with the sheer number of monsters standing around. Everywhere I looked there were monsters, either alone or in groups, patiently waiting for me to walk over and clumsily fight them. The monsters I encountered consisted of one of the following:

A really small minotaur with a cleverly applied reptile texture

Several sizes of featureless "golems" in an exciting variety of colors

The only way to gauge which monsters are tough and which aren't is by trial and error and noticing adjectives like "armored" or "jade". Apparently "jade" translates to "bad ass" in the language of the Blade Mistresses. To add even more variety to this already unbelievably huge heap of variety when it comes to monster encounters, all of the monsters drop the same things. They drop an eponymous meat type (i.e. wood golems drop "wood golem meat"), a stick, and if you're lucky, a carving. There are a few other items they drop but all of these monsters have the chance of dropping these items, with no rhyme or reason. For example a saber toothed tiger I killed was apparently playing fetch with a grungy stick, a fish, and a shining carving. Either that or the saber toothed tigers in this enchanted land of fantasy and adventure have those little Saint Bernard barrels around their necks only instead of schnapps they're full of sticks and fish.

Not all of Blade Mistress consists of wandering around the wilderness. There are a number of dungeons for you to delve into that are represented as big rocks with glowing holes in them. Once inside you will find that apparently all dungeons were created by a race of towering titans roughly thirty times larger than you or any other monsters in the game. Since all movement in the game is done by shifting from square to square - this is animated at least - and the designers opted to use fucking gigantic squares, all of the dungeon's corridors are locked to the width of the movement squares. The attention to detail in Blade Mistress really shows with the maze-like dungeons and their depthless polygonal walls. I particularly enjoyed how all of the wall textures seemed to have been applied completely randomly, with long stretches of hallway plastered with a repeating series of awkward-looking gate textures. 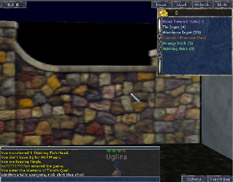 Imagine this fence texture repeating about thirty times and you've perfectly visualized one of the madcap dungeons in Blade Mistress!

After wandering around long enough I finally encountered a jade golem and my extremely horse-faced character was killed. Dying in Blade Mistress is actually a convenience more than anything, as it teleports you back to the starting town with a full inventory. You reappear there with only a few points of health, but your character heals so quickly by the time you encounter your first retextured minotaur you'll probably be well on your way to full health. Once I realized that there was no penalty whatsoever for dying I began to die as a form of transportation back to the town, saving myself the time of actually walking back.

It's good that they included this fatal shortcut back to town as the controls in Blade Mistress are nothing short of abysmal. The game features a free-rotating camera, but you can only move in four cardinal directions, meaning that actually moving in the direction you want doesn't always make sense. If a monster has you outgunned, don't worry! Thanks to the innovative AI in Blade Mistress the monsters are completely confined to their square prison and you can flee without fear that they will give chase. That's assuming you can actually find a square that doesn't contain a monster and somehow get your character to go in that direction.

The inventory interface is also horrid. Without a paper doll that you can drag items onto you have to unequip a weapon by clicking and holding it until a menu appears, then do the same to equip a new weapon. What's better is you can equip anything, from swords, to sticks, to golem meat. This presents less of a problem then you would think since the only thing that actually appears on your model when you equip items is your sword. The trading interface is cumbersome and even picking things up from a corpse (dead monsters turn into large pots on the ground) becomes a tedious task.

One thing you certainly won't have to worry about in Blade Mistress is finding that ultimate suit of armor. The makers have boldly broken with RPG tradition by not including a single piece of armor in the entire game. For my fighter this was easily offset by her "Dodge" skill, which was the only skill she could use, all but one of the rest being reserved for magic users and the final skill being reserved for smiths. Once again flaunting their will to break from the norm the brain trust at Aggressive Game Designs has opted to do away with the usual linear level and skill progression of most roleplaying games. In its place you will find that skills advance as they are used, gaining points rapidly on an arbitrary scale that ranges from at least 0-999. Raising your skills seems to be a fairly worthless endeavor. In my hour of playing I managed to get my dodge skill up to 144, which had no apparent effect on my ability to avoid the brutal assaults of minotaurs and larger minotaurs.