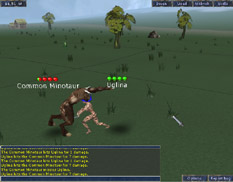 Combat is an exciting game of cat and mouse. That is, if cats waited in a square out in the open for a mouse to come over and exchange awkward blows for a few minutes and then exploded into shitty red alpha effects and turned into a pot full of cat meat and sticks.Despite all of these shortcomings the game seems to be relatively popular. Not popular at all for an MMORPG, but considering how shitty it is the fact that I saw at least thirty people while I was running around is sort of disappointing. If anything I consider it a testimony to how willing people are to put up with shit if the price is low enough. In the case of Blade Mistress the game is currently free and some people are already busily power leveling their skills in a grotesque display of nerdiness. I heard one player bragging that he had nearly reached 777th level in smith. He told me he had logged some 36 hours playing Blade Mistress and I advised him to immediately shoot himself in the head. I shudder to think of someone whose life is so empty pouring 36 hours into playing - let alone power leveling in - a game this shitty does not seem like a fucking bad idea. I wouldn't be surprised if the Beltway Sniper has a character in Blade Mistress and power levels his Eagle Magic skill in between headshots.

The sound in Blade Mistress is sparse but somehow annoying. The minotaurs all make a recognizable horse sound, and despite the fact that they attempted to make the tiny minotaurs look like lizard men, they also make this horse sound. The dungeons feature "intense" and "atmospheric" sounds like "water dripping" and a sound that resemble a cross between a bubble popping and a cat heaving up vomit. If you are one of the bold souls who is looking to explore a fence-walled dungeon blacker than a trillion midnights and with the ambient sound of a sick cat infested waterworks, then this game has the right package for you!

For those of you interested in getting started in the game of Blade Mistress I have put together a little strategy guide. Obviously my first piece of advice would be to uninstall the game and destroy your computer with a fire axe to prevent you from ever downloading it again. Since you're probably not going to take that advice I offer the following tips:

If the game seems like it has bad graphics at first try adjusting the resolution to a higher setting. In higher resolutions the game looks far worse.

Screaming obscenities about how shitty the game is may not win you any friends but it won't get you banned either. There seems to be no moderation whatsoever on the server.

When you enter a square with multiple monsters your character will automatically fight them. However, after the first opponent has been dispatched your character will stand motionless for roughly thirty seconds trying to figure out who is beating the living shit out of her. I would advise either manually attacking the next monster or uninstalling the game and destroying your computer with a fire axe.

If someone starts yelling numbers at you and you reply with slightly different numbers you will get accused of hacking your character. I have no idea what happened to make them think that because my character was about as effective as a set of SCUBA gear made out of a burlap sack and a bendy straw from Burger King.

Leveling in the game is replaced with "incoherent shit", so just keep walking around until you can buy a new sword.

You might consider venturing into a dungeon for a change of pace. Don't bother, dungeons have no extra treasure and much fewer monsters than just walking around outside. They also look like a map from Wolfenstein 3D designed by someone with no special perception and seen on a monitor with the brightness setting stuck at "dark as hell".

Blade Mistress makes fighting monsters difficult by giving them ten times as many hit points as you and making you do ten times as much damage as them. It's another wacky tradeoff and deep life lesson about how love hurts.

Choose your face and choose your destiny! I really hope they use that tag line, either that or go all Abbie Hoffman and change the title of Blade Mistress to "Uninstall This Game".