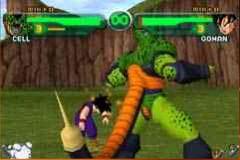 Goku's son, Gohan, is apparently very frightened of a giant lizard with a mutated carrot sticking out of his back. The legendary Super Saiyan warriors sure are a bunch of pussies.As if that wasn’t bad/funny enough, there’s a move you can do that will put the fight into ‘Burst’ mode. It’s a perfect representation of the hand-to-hand fighting you see in the show, and that isn’t a compliment. First the entire background changes to those random bending lines that always show up in the background of action scenes. Then you have to start randomly mashing buttons, and the idea here was to have the fight kick into overdrive and go into a flurry of punches, kicks and blocks. What actually happens is the game randomly flashes through a total of 5 frames of the two people fighting, while you sit there staring blankly at the TV and wondering who you tortured to death in a previous life in order to deserve being tricked into playing this game.

Despite all this, however, I managed to find one way to enjoy Budokai. Pressing the ‘special attack’ button makes your character throw what appears to be a giant glowing hunk of corn at your opponent. If you hit ‘block’ right as it hits you, you yell something annoying like ‘back atcha!’ and reflect the nutritious glowing kernel of doom back at your opponent. I happened to have a friend over who’s as easily amused as I am, so we backed off to opposite ends of the screen and spent a while playing volleyball by reflecting the same attack back and forth. Our record was 51 times across before one of us fucked it up (the term ‘one of us’ meaning ‘him’), but for some reason people at parties just aren’t impressed when I brag about it. Maybe we should go for 60.

After my friend and I finished playing the horrifically painful two-player mode and he ran outside sobbing and looking for a drainage ditch to slip and fall into, I decided to try out the Story Mode, which proudly proclaimed that it would let me ‘enjoy the spectacular story of Dragon Ball Z.’ I played all the way through it, and I must say, I did not notice a single ounce of, uh, spectacularity. The cutscenes were badly animated and served only as clumsy segues from one fight to the next. The lip-syncing in particular was awful, especially during a few parts where they zoom in on a guy’s mouth while he speaks until his mouth takes up the entire screen. Pretty much every single scene went something like this. 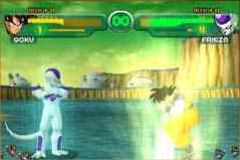 And here we see Goku, the legendary hero of the series, cowering in fear of some kind of bizarre luminescent mist.

Goku: Haha, I am glad I was able to win that battle!
Random villain from the show: Goku, my power levels are your power levels plus 150, there’s no way you can defeat me!
Goku: Oh no, my power level is at less than half of whatever my power level normally is! But I shall defeat you anyway!
(camera zooms in on Goku’s face and jagged white lines appear around the edge of the screen while Goku goes through a series of facial expressions that make him look like an ape taking a series of cattle prod shocks to the ear)
Goku: YAAAAAAAARRRGARRRRYARGLEBARGLEGUHGUHBLARGSPLAT
(battle begins)

I won every single battle in the story mode by using the same move over and over. I would walk up to the enemy and hit punch-punch-punch-punch-special. This caused Goku to do a weird little punch combo, then his arms would flash and he’d yell “Kamehameha”, which undoubtedly translates into something like “ultimate dragon inner soul fire mega super giga ki energy gaia eternal blast +5”. Then the area around him would flash, and the enemy would promptly fall down and lose a whole bunch of health. Then I’d hold block while the enemy got up and kicked at me once, and proceed to do the whole thing all over again. This worked for every single battle, including the two or three where you don’t play as Goku, since all the other characters have almost the exact same move.

Some licensed games you can look at and realize that while you don’t enjoy it, it would at least appeal to fans of whatever TV show/movie/series of limited edition ceramic mugs it was based on. Budokai would even have a hard time appealing to the insane Japanophiles out there who spend all day translating the original DBZ dialogue into English for their Angelfire fanpage and who randomly put ‘kun’ and ‘chan’ at the end of their names to sound more authentic. I suppose someone out there must have enjoyed this game, but I really don’t want to meet that person, mostly because upon seeing me he would fantasize about spontaneously sprouting blonde hair, yelling a bunch of insane gibberish and blasting me with a giant fireball that sends me careening into a nearby mountain. DBZ FORERVER!!! !!! !!! !!!