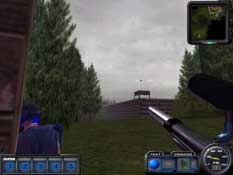 As you can see on the left side, my instinct to bond with my teammates and learn to cooperate to achieve success was overpowered by my instinct to shoot him in the back of the head and laugh.I assume CatDaddy figured the game would be a huge success and have a large, long-lived online community with thousands of servers and dozens of mods. At least that’s the only justification I can think of for including single-player AI that looks like it was made by a single employee on his lunch break who wrote all the code by stabbing his keyboard in random places with a pencil. That would explain why the enemies have a very limited arsenal of moves:

Running along a preset path through each map

Stopping and staring blankly while you shoot at them

Stopping and staring even more blankly than before

Oddly enough, every once in a while they actually decide to shoot at you, and they possess the incredible ability to miss each shot by an entire zip code.

You can kill every member of the enemy team repeatedly by waiting until you see a red dot around a corner, holding down the trigger, and aiming it in one spot until the enemy runs straight into your line of fire. Of course, this is a family friendly game, so instead of doing something drastic like dying the guy will just raise his hand, say “I’m out” and fade into nothingness. And here’s where the ‘hardcore’ option rears its ugly head again. If you have hardcore mode on, when you get hit you will drop your gun and have to use the crappy default one that has trouble building up enough muzzle velocity to clear the end of the barrel. Yep, this game is so hardcore that it isn’t even constrained by logic – it can throw in stupid rules that don’t even exist in regular paintball and that make no sense whatsoever! Things like this show why EPB4 is so extreme and hardcore that you have no hope of surviving it unless you are a bad enough dude to rescue the president.

And this might come as a bit of a shock, but the graphics are absolutely horrible. People run by pointing their bodies forward and moving their legs back and forth in a scissor motion while they glide along the ground. The maps all look stupid, but a few of them transcend ‘stupid’ and earn the title of ‘really really stupid.’ The player models only have two polygons for the face – one for the left side and one for the right. This makes your head look like you’re either a lego-human hybrid or you just tried to eat a toaster. And the sound isn’t much better – there are several mind-bendingly bad speed metal tracks, including a recycled one from the menu, but this time it serves as the backdrop for a cacophony of generic ‘splat’ and ‘fwoosh’ sounds, broken only occasionally by “I’m out.”

The mess of a game that I was playing made me very skeptical of the publisher’s claims that it offered a fantastic online multiplayer experience. Reluctantly I updated and started up Gamespy Arcade to check just how many people were enjoying this blob of digitized shit from the comfort of their basements. I found a total of one player online, hosting a game called “my room!!! come and play!!!!” with a 385-millisecond ping time. This led me to picture an anguished 14-year-old hosting the server on his dialup connection, silently choking back tears as he wonders why he let the salesman at CompUSA talk him into buying this game instead of Half-Life.

The gameplay, graphics, music, sound and even the manual are all hilariously awful. If anyone ever creates a Mystery Science Theater 3000 for video games, Extreme PaintBrawl 4 will be featured in the pilot episode. But until then, everyone who has come into contact with this game should be euthanized for the good of humanity. And yes, that does include me.