Training Challenge 3: The third and hopefully-but-not-actually final challenge involves swimming through water, even though it doesn’t resemble “water” so much as “a giant semi-translucent blue marshmallow peep that ripples around with three frames of animation.” You can only stay underwater for 30 seconds before you suffer rapid brain damage and start thinking that making a game with the Pie in the Sky engine sounds like a pretty swell idea. Also for some reason you have a lot of inertia while underwater, so when you try to round a corner you’ll end up sliding sideways and slamming into the opposite wall.

Training Challenge 4: Annoying FPS Cliche #35-B rears its ugly head here, as you are confronted with a door that can only be opened with a remote-detonated mine. Fortunately you are lucky in the same way that every FPS hero in the universe is lucky, because hey, there just happens to be a remote-detonated mine on the table in the next room! You don’t blast the door open with them though, you simply set the explosives off in front of the door and watch it sit there for a second and then slowly slide open. After you’ve done this, you come across a completely different type of door that has to be opened by a grenade launcher, since apparently these doors are very snobbish and picky about which types of explosions they’ll allow themselves to be opened by. 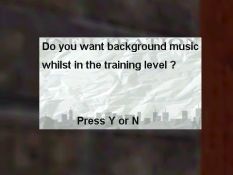 This proves my theory that anybody who uses the word "whilst" is either fat or british.

I felt like a badass after completing the training, and really, can you blame me? I was all pumped up to tackle the main game and infiltrate...uh, whoever I’m supposed to be infiltrating. I never really found that out because the game doesn’t have an introduction and the Help and About menu options both give error messages. But I wasn’t going to let that stop me! I entered the teleporter in the mysterious green room – from the outside it looks green, but when you’re inside it all the other rooms look green. I’m guessing that instead of an actual green room it was the world’s shittiest forcefield, but I wasn’t even going to let that stop my formerly unbad ass! I grabbed the shotgun sitting on the table, took heart at the fact that it could fire 20 shots without reloading, and hopped into the red glowing wire cage thing that was supposed to be a teleporter.

I spawned in a snowy alley somewhere while giant purple pixels flew out of my face, white pixels rained from the sky and a broken lamp across the alley puked blue pixels all over the ground. I started trudging across the big outdoor hallway, happily noting that my loud, exaggerated footsteps sounded slightly different because I was no longer walking on tile. As I rounded a corner, panic struck! An enemy was firing a gun at me, and every hit’s damage toll was almost in excess of 4! After standing there for a while watching my health slowly drop to 80, I decided to take action. I coolly aimed my shotgun at the enemy’s chest, pulled the trigger and....nothing.

The shot went off, but the enemy didn’t really seem to mind because he just sat there shooting at me. I fired off five more shots with no effect, while the enemy demonstrated his remarkable ability to fire 40+ rounds from a pistol without stopping or reloading. He decided to run up to two feet in front of me and continue his firing spree, at which point I unloaded another five or six shotgun blasts into his chest with no effect. Fearing for my life, I backed off a little and fired again, and was rewarded with a spray of red pixels that tried really hard to look like blood. Another shot and he went down. Fortunately I was able to pick up his handgun, which hits the enemy almost every time and does more damage than the shotgun. 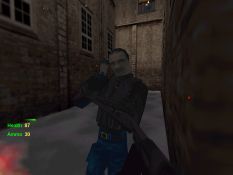 What, you think a shotgun blast from here is going to damage him at all? You FOOL!

After that wonderful experience, the game gets even worse. You end up in an abandoned truckyard climbing up netting and trying to jump across storage containers to get a remote mine so you can open up a door. Once you get the door open you get to explore a wonderful abandoned office building, and the whole thing basically degenerates into running into a door that can only be opened by a certain item, finding that item, opening the door and repeating until you get to the end. After climbing through a ventilation shaft and getting a keycard you get to the teleporter at the end, which teleports you to the one place you want to go more than anywhere else in the world – out of the game.

On his website, the Bobster claims the full version of this thing will contain no less than 26 levels. Actually he claims that all 26 levels are completed and the full game will be release when he is satisfied with it, and if there’s any justice this means the game will be released somewhere around the time the moon falls out of orbit and crushes all the people caught between it and New York City. Until that day comes, feel free to check out the demo for yourself. You’ll enjoy it in the same way you’d enjoy swimming in itching powder or trying to swallow a railroad spike.