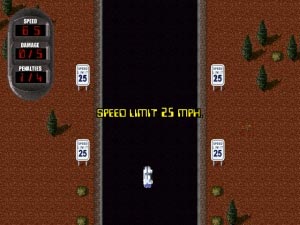 I wish the speed limits in this city were a little more clearly marked.The graphics, as might be expected, are so bad that my monitor managed to scream in agony despite its lack of lungs or vocal cords. The road is just a big black rectangle with no markings on it, since apparently the creators of this ultra-realistic simulation believe that staying on the right side of the road is unnecessary and nobody really needs to follow those double yellow lines. The roadside scenery ranges from “dirt” to “dirt that was recolored to look like snow”, and occasionally “dirt that was recolored to look like snow, which was in turn recolored to look like slightly lighter-colored dirt”. And the side of the road is littered with grainy sprites of trees and houses that are the same size as your car.

“Wow”, I said to myself as I cleansed my hard drive of this game using the miracle of the uninstaller, “that is the worst freeware game I have ever seen.” Then I was struck by a horrifying thought – what if it wasn’t freeware? My fears were confirmed when their webpage for the game contained a link to ‘Order Information and Pricing’. Okay, I thought, so it has a 10 or 20 dollar registration fee, big deal. But no. The full version of this thing costs $59. Fifty-nine dollars.

As if that wasn’t distressing enough, I proceeded to exponentially increase my level of dismay by looking slightly to the right. Apparently there is also a ‘professional’ version of SmartDriver available. The only difference between the ‘professional’ and the ‘regular’ versions is that you can only register up to three users in the regular version, and in the professional version you can register as many as you want. So, how much extra do you think the professional version would cost? An extra 5 bucks? Maybe 10 or 15? No. The professional version costs $129 plus shipping and handling. They actually expect people to mail in a hundred and twenty nine dollars, plus tax, plus shipping & handling, for a horribly-designed DirectDraw game about moving a little car back and forth on the screen. Oh, and on a completely and absolutely unrelated note, their ‘About us’ page mentions that when they tried magazine advertising the ads failed to get them a single sale. And on another note which is completely unrelated both to the first note and the note after that which was unrelated to the note before, their page suggests that people with ADHD, learning disabilities and brain injuries might be interested in picking up a copy.

It’s one thing to make money preying on gullible parents by offering software that you claim will teach their kids without resorting to extreme measures like ‘parental involvement’, but it’s another to scam people out of $129 at a time and claim you’re doing it for the benefit of the children. Especially since their page for SmartDriver is suspiciously lacking of screenshots and one of those pages where they print emails from happy users saying the company’s product cured their entire family of cancer and brought their dog back from the dead. Parents, if any of you read this... do not buy this game for your kids. Or when they reach driving age they’ll get their revenge by driving the family car into the neighbor’s pool.