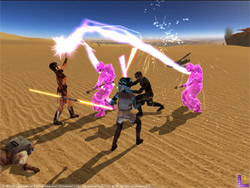 Sand People get introduced to some force lightning courtesy of Bastilla.Like a good Star Wars game, Knights of the Old Republic takes place on a variety of planets both familiar and not-so-familiar. The game manages to take us to old favorites like Tatooine and Kashyyyk without succumbing to the sort of fan service pandering and in jokes rife in the Star Wars prequels. You don't meet Yoda or C3PO on any of these planets and you don't have to put up with any of the dialogue Lucas continues to vomit forth unbidden.

Taris - Taris is Generic Future World. It's got the usual anime-like dystopian slant of having the wealthy live in the highest towers of the gigantic cities while progressively poorer classes live below them. At the very bottom are a bunch of homeless people who frequently mutate into these ape-like monsters that look like Morlocks. Despite some generic interior areas like the multiple identical apartment structures the city has a pretty interesting feel to it and gets suitably decrepit the further down you go in the spires.

Dantooine - Get ready for agrarian hippy planet! The Jedi Council act like a stodgy yet suitably new age religious group/cult. Hilariously the game's developers conned Ed Asner into doing a voice for one of the Jedi Council members that you talk to for about fifteen seconds. Oh, Ed Asner, you're so dreamy! Dantooine really made me question my decision to play one of the good guys thanks to all the smooth talking ultra liberal crap that the Jedi Council spews. When you join up with the Jedi Council you are treated to what may be the first ever "training montage" in video game history.

Tatooine - Even though Knights of the Old Republic takes place thousands of years before the Star Wars movies Tatooine is the exact same as it is in the movies. There are Jawas, Sand People, and more moisture farming equipment than you can shake a stick at. Knights of the Old Republic informs us that Sand People aren't as evil as they are cracked up to be and creates a lot of almost insulting parallels between their culture and Native American culture. You'll realize this if you take the time to find out the history of the Sand People and discover that they are the way they are basically because they are stupid.

Kashyyyk - Welcome to super-sized Swiss Family Robinsons where Wookiees are being exploited by the evil Czerka Corporation and only you, Zaalbar, and a whole lot of violence can throw off their shackles of oppression. Be sure to buy anything good that the Czerka shopkeeper has before the Wookiees decide to take over because they apparently eat all of the incredibly awesome equipment he has for sale. You'll also pick up Jolee here and get to fight some invisible Mandalorians.

Manaan - I hope you like underwater missions! Manaan is probably the least fun planet to visit thanks to several frustratingly difficult puzzles and more than one mission where you walk around slowly underwater. It's basically a single large city that is floating on a gigantic world-spanning ocean and ruled over by the neutral race of fish people there.

Korriban - Home to both the evil Czerka corporation and the evil Sith training academy. You can expect very few friendly welcomes and a lot of chances to either kill people or have very gay light side results where you let them go.

The Unknown Planet - Ooooh it's mysterious! What can the Star Forge be? Could it be a STAR FORGE?!?! On a completely unrelated note, where are the Sith getting all those spaceships of mysterious design?!!?!?!?!

The only planet in the game that really got on my nerves was Manaan. I hate obtuse puzzles, I hate underwater missions, and most of all I hate it when every faction on a planet is annoying yet you can't just open up a can of stab ass on them. My favorite planet was probably Tatooine, because who can honestly say that they don't love Jawas and constant violence?

The bottom line on Knights of the Old Republic is that Lucas should look into hiring the team at BioWare that made this game to write and direct his next movie. Even the worst of the dialogue with the most generic throwaway character on Tatooine is a thousand times better than the best that the prequel movies have to offer. What BioWare has managed to do is create a fairly original story with interesting characters, good dialogue, great action, and the freedom to just about become any sort of Jedi you would like to. The game's graphics are excellent and it's full of fun (if shallow) mini-games. The biggest black mark I can think to put against it is the hokey new age touchy-feely crap that Lucas himself has created.

In other words: GO BUY THIS GAME!

Or, similarly: GO BUY THIS GAME AND AN X-BOX TO PLAY IT ON!

Or, for those of you with patience: WAIT FOR THIS GAME TO COME OUT ON PC AND THEN BUY IT!